WASHINGTON, March 16 (UPI) -- (This is the fourth part of a five-part analysis of the regarding the conflict between the United States and Iraq.)

Confronted with the growing realization that Iraqi President Saddam Hussein's formidable army was not going to fall apart after all as soon as an under-powered U.S. land force invaded his territory, the civilian war hawks planning war strategy in the Office of the Secretary of Defense rapidly cobbled together a new, equally high risk strategy at the last minute. It has been sold to the American public as "shock and awe."

But, as respected war correspondents and military historians Rick Atkinson and Thomas Ricks noted Sunday in their analysis in The Washington Post, this strategy while amazingly audacious, also contains awesome risks.

Echoing a repeated theme we have sounded in UPI analyses over the past half a year, they soberly noted that the war is to be launched "with a force only one-third the size of the one that liberated Kuwait 12 years ago." Yet, "U.S. commanders poised to attack Iraq have been given a far more ambitious mission: march hundreds of miles to Baghdad, neutralize the Iraqi military, overthrow President Saddam Hussein and then prevent a country the size of California from disintegrating into chaos."

Nice work if you can get it.

These vastly ambitious mission goals were crafted at a time the OSD planners were convinced that the Iraqi army would not put up any kind of serious resistance. Almost all top Army and Marine regular forces generals always thought otherwise, as did Army Intelligence, but the OSD planners dismissed their concerns.

As respected military analyst William Lind put it in a commentary published earlier this month by UPI, the Pentagon civilian planners were then still "so confident that the Iraqis will not fight that our operational plan depends on them not doing so. We will invade Iraq with a force as small as two Army divisions and one division from the Marine Corps. That is enough Americans to take Iraq's surrender but nowhere near enough to defeat Iraq if Iraqis fight (which also says that our operational plan is very fragile.)"

The contradictions in U.S. planning for the coming war with Iraq, as senior Army and Marine officers are grimly aware, are filled with contradictions.

In 1991, then-Central Command chief Gen. Norman Schwartzkopf and his cautious Chairman of the Joint Chiefs of Staff Gen. Colin Powell demanded and got a vast build up of 700,000 combat and support forces, overwhelmingly deployed across northern Saudi Arabia, before they were prepared to start ground operations. And that was only to liberate the tiny emirate of Kuwait.

Yet in 2003, 12 years later, the Bush administration's top civilian Pentagon planners confidently put less than one-third that number of troops into action in a war that is ambitiously planned to actually conquer a country of around 23 million people and an area the size of Texas.

Also, as Lind pointed out late last year in an earlier analysis published in The American Conservative magazine, the main thrust of the U.S. attack appears likely to be northwest up the main line of Iraq's two great rivers, the Tigris and the Euphrates, from Kuwait or from the Iraqi port of Basra.

And, as Lind noted in that analysis, the record of military history shows that long axes of advance dependent upon a single line of communication can prove extremely vulnerable especially if the armored forces of the other side are formidable, and capable of operating effectively even in the face of enemy air strikes.

Lind further observed the almost totally overlooked operational success of the Iraqi Republican Guard in extricating itself from U.S. encirclement maneuvers in the 1991 Gulf War. This revealed, he wrote, that its formations and their commanders did indeed have a very high level of expertise, experience and toughness under fire.

Iraq's elite military units have been recruited from the country's middle area, its Sunni Muslim heartland. And although Sunni Muslims are a minority overall in Iraq, the elite units of the military are based upon them. Here, Lind noted in his UPI commentary, U.S. triumphal rhetoric about bringing the blessings of democracy to the Iraqi people is likely to backfire by motivating these key unites to fight harder than ever.

"By saying we will bring democracy to Iraq, we are also saying that we will throw the Sunnis out of power, since they are a minority. In a country like Iraq, if you lose political power, you lose everything else too, including maybe your life," he wrote.

Therefore, Lind concluded, "My bet is that the Sunnis will fight us. If they fight in the cities, this will not be an easy war."

A drive up Iraq's two great river systems by a Western army against unexpectedly professional and stiffening military resistance. It was tried once before this century and the precedent was not an encouraging one. A British-Indian army of 10,000 men in 1915 was forced to surrender to encircling Ottoman Turkish forces.

The debacle stunned the British and the entire Middle East. Only one greater military reverse had ever before been inflicted upon Western powers by a Middle East nation and that was only the year before, when those same Turks forced a British Imperial Army to evacuated the beaches of the Gallipoli peninsula after a vain attempt to storm them and command the Dardanelles Strait that led to the Ottoman capital Constantinople, modern Istanbul.

Both British defeats owed a lot to the perils of racism, complacency and drawing the wrong lessons from history. Because Turkey had been a nation in historic decline for more than 200 years, the argument went, therefore its forces would be unable to put up a good fight against a vigorous dominant Western power out to defeat and transform them for their own good.

But the Turks belied such simplistic, and racist stereotyping. In defense of their own country, they proved a formidable foe indeed. Iraq's army also proved formidable in defeating Iran, a nation with more than four times its population, in the 1980s. And then its forces proved surprisingly fast -moving and resilient in escaping U.S. efforts to destroy them despite the weight of overwhelming power in the 1991 Gulf War.

As the Biblical Book of Ecclesiastes soberly warns, "The race is not to the swift nor the battle to the strong ... But time and chance happeneth to them all."

Next: Stalingrad in the sand?

Defense News // 13 hours ago
Maintenance on USS California sub completed in record time
June 16 (UPI) -- The submarine USS California returned to the fleet this week after the fastest maintenance of its kind, the U.S. Navy announced on Wednesday. 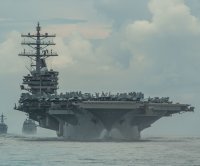