GAZA, Feb. 16 (UPI) -- Three Palestinians, members of the Democratic Front for the Liberation of Palestine, were killed by Israeli troops' gunfire, and 24 Palestinians were injured Sunday during the exchange of gunfire in the West Bank town of Nablus, DFLP officials and medical sources said.

DFLP official Qaiss Aby Layla told United Press International that a special Israeli army force raided a building that contains offices for the DFLP and other Palestinian organizations. He said those injured included bystanders as well as people in the building.

Witnesses said the gunbattle lasted for more than three hours.

The Israeli troops pulled out of the area after Khalid and the three other people were detained. 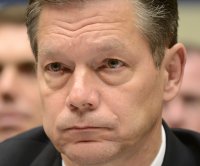