Under way after years of planning is a joint Polish-EU project that will add thousands of guards along the country's eastern border, upgrade electronics at land and seacoast checkpoint stations and introduce visa regimes for Russians, Ukrainians and Belarusians who want to visit or work in Poland.

Once the "wall" is completed by 2004, Poland's frontier will no longer work like the sieve it's been since the early 1990s, allowing streams of illegal immigrants, drugs and contraband to cross Poland into Germany and points west, and providing an easy escape for thieves shipping stolen cars and other goods from west to east.

Rather, this 1,000-mile barrier will be an iron curtain of sorts for Easterners -- honest and dishonest alike -- and a pillar for the popular political agenda in the West sometimes called "fortress Europe."

EU states fought long and hard to win a border-clampdown agreement with Poland.

For years, the Warsaw government put off adopting the West's so-called Schengen standards for protecting its borders. But it couldn't wait forever. Border control and visa restrictions for eastern neighbors -- along with several crime-fighting mechanisms -- were key components of the "justice and home affairs" section of Poland's EU application form.

Simply put, Poland's bid to join the European Union by 2004 was doomed unless the home affairs chapter was closed by the end of 2002 and the borders sealed according to Western standards.

The administration of Prime Minister Leszek Miller and his ruling Democratic Left Alliance finally acquiesced in July by closing the chapter and accepting $6 million from Brussels to beef up the border. The project is slated for completion in June 2004.

A year ago, Warsaw accepted the Schengen standards in principle but balked in their practical application.

One reason for a delay was simply the size of the task. The borders in question are rural and expensive to patrol. To the north, Poland shares a 150-mile border with Russia's enclave Kalingrad. To the east, the borders with Belarus and Ukraine each stretch more than 250 miles. The other open area is a 300-mile Baltic Sea coastline.

Before the European Union stepped into the picture, the frontier was loosely patrolled by soldiers and border guards with old equipment, low motivation and limited legal clout. For the most part, nothing but forests and potato fields stood in the way of illegal immigrants from as far as central Asia.

But after Poland began the EU-inspired improvements two years ago, more border guards were hired at higher wages, five helicopters were bought for aerial surveillance, and border stations were linked to a computer network.

In the next stage, for which the European Union will cover two-thirds of the cost, the focus will be adding about 5,000 border and customs workers, training them and upgrading communications.

Another factor weighing on Warsaw was economic: Poland enjoys fruitful agricultural and market ties with the East. For example, tens of thousands of day-workers regularly cross from Ukraine, Belarus and Kalingrad for jobs on Poland's farms. The influx of cheap labor is even greater come harvest time. But to satisfy the European Union, visas will be required for those laborers.

In addition, low-cost consumer goods made in Poland are sold in the East. But those markets could shrink if, for example, Russia retaliates for the new visa rules by increasing tariffs on Polish products. Already the hard feelings are brewing, since Russia's request for a no-visa corridor between Kalingrad and Poland was rejected, and visa regimes for other former Soviet states such as Moldova and Georgia took effect last year.

In an effort to soften the visa controversy, Warsaw adopted a multiple-entry system that officials promise will be fast and inexpensive. The system kicks in this fall, after harvest. Farmers and their laborers hope the system works.

To Western Europeans, all efforts for a tighter border are justified by reports that Russian crime gangs and drug dealers gain access to Germany via Poland, and that the porous Polish border contributes to illegal immigrant woes.

Moreover, those with a fortress Europe attitude give Poles barely more respect than Russians, whose country is not an EU candidate. For example, many Germans fear an influx of cheap, Polish labor after EU enlargement will complicate life in the former East Germany, which is plagued by high unemployment.

It all adds up to a program through which EU countries are helping -- even pushing -- Warsaw to lock its eastern border, while at the same time casting a suspicious eye toward future Polish immigration.

No wonder the European Union has decided that Poles, even if their country joins the union in 16 months, won't be allowed free travel in Western Europe until its eastern border controls are fully implemented, probably in 2006. The fortress must stand.

Defense News // 2 minutes ago
Navy defends call for 1 destroyer in 2022 budget, tells Congress new contract coming
June 24 (UPI) -- The acting secretary of the U.S. Navy on Thursday defended the call for only one Arleigh Burke-class Flight III destroyer in this year's budget instead of two during a congressional budget hearing. 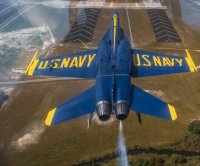 Defense News // 4 hours ago
Afghans who helped U.S. forces to be relocated
June 24 (UPI) -- The Biden administration will relocate Afghan interpreters and others who assisted U.S. forces to other countries while they wait for special immigrant visas to enter the United States.