Brown is the latest high-profile British politician called before the Iraq Inquiry panel in London. Previously former Prime Minister Tony Blair testified he had "no regrets" about ordering British forces to participate in the invasion and that the war in Iraq has made the world safer by taking Saddam out of power.

Brown was Blair's chancellor of the exchequer so his inquiry appearance is seen as an opportunity to delve further into the rationale for the 2003 invasion. But, unlike Blair, Brown is still in office and will soon be facing elections that will determine whether he remains prime minister. That he ordered the inquiry last summer was itself a political step.

He told the inquiry, "It was the right decision and it was made for the right reasons."

Brown's role in the war had come under fire in earlier testimony. Some military leaders have said they nearly resigned in 2004 over funding issues and former Defense Minister Geoff Hoon blamed Brown's treasury policies for forcing military commanders to "make some rather difficult cuts."

The prime minister said that in pre-war discussions he told Blair, "There should be no sense that there was any financial restraint that prevented us from doing what was best for the military."

Brown on Friday was asked about the decision to go to war and said, "I was given information by the intelligence services which led me to believe that Iraq was a threat that had to be dealt with by the actions of the international community." He also said diplomatic measures were pursued until the invasion. 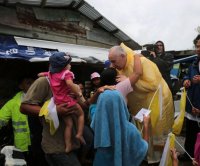