This week the Treasury Department released new rules that will help homeowners who need to sell but can't get a price high enough to pay off their mortgage.

The guidelines make it easer for troubled homeowners to sell their home via short sales. In a short sale, the owner agrees to sell for less than the balance owed on the mortgage but avoids foreclosure and allows homeowners to avoid damage to their credit report. Short sales mitigate the impact on local markets because they avoid public auctions and foreclosure, where sales prices are usually lower. About one in 10 home sales this year was a short sale, or an estimated 500,000 sales, according to the National Association of Realtors.

The short sale program has been in effect since May, but few borrowers have utilized it. Borrowers often find themselves hung up by negotiations with multiple lien holders and mortgage insurance companies. Real estate agents have complained that sales fall through as lenders bicker over the sales price, what they should receive from the proceeds, and whether the borrower will be held accountable for the debt in the future. Mortgage servicers have only 10 days to approve or disapprove a request for short sale, and when done the transaction must fully release the borrower from the debt.

The new guidelines include a $1,000 to $1,500 payment to homeowners to help cover their moving costs and timelines and a standardized process. It would save time by requiring mortgage companies to use the financial and hardship documents submitted by borrowers seeking a loan modification. Mortgage companies will have to approve short sale terms, including the minimum listing price, before the house is put on the market, which should speed up the approval process.

However, it won't take effect for four months. Mortgage companies don't have to launch the program until April 5, 2010.

About half of homeowners in default have more than one home loan. Getting the approval of secondary lenders, who often take a greater loss proportionately than primary lenders in short sales and do better in foreclosures, has been a major barrier. The Treasury program is voluntary for lenders who hold second mortgages, such as home equity loans or second liens. Under the Treasury program, secondary debt holders can receive up to $3,000 to release their claims on the property, hardly an incentive when their losses could be ten or twenty times that amount.

U.S. News // 14 minutes ago
FBI releases photos of men accused of beating cop in Capitol siege
Jan. 17 (UPI) -- The FBI on Sunday released photographs of seven suspects, all men, wanted for assaulting a police officer during a siege on the U.S. Capitol earlier this month as federal prosecutors announced more arrests. 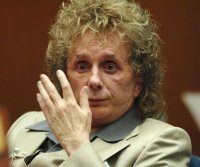