Shot of the show floor during the 2012 National Restaruant Association Show. (Courtesy NRA).

Shot of the show floor during the 2012 National Restaruant Association Show. (Courtesy NRA).

CHICAGO, May 19 (UPI) -- Choosing a restaurant used to be a simple decision: fancy or casual; Italian, Chinese or American; kids or no kids; friends or alone; pile into the car; go.

Since the advent of the Internet -- and then social media -- and the realization by businesses they could use the Web as a tool for luring more customers, picking a restaurant has gotten a bit more complicated.

From coupon sites to daily deals to reviews, the Internet has made eating out a project.

As 61,000 restaurateurs, food service and lodging professionals, and vendors descend on Chicago this weekend for the annual National Restaurant Association trade show, a number of digital operations are out to simplify the process for both the diner and the eatery.

Restaurant.com's President and Chief Marketing Officer Christopher Krohn says his site matches the diner to the restaurant. The site boasts some 50,000 minimum-purchase deals from 15,000 restaurants nationwide that never expire and can be exchanged if plans change.

This is different from other deals," Krohn said. "They never expire. There's no time pressure. And it avoids the challenges of daily deal models -- there's a steady stream of customers rather than a crush with a horde of coupon-holding customers."

Krohn said daily deals can complement restaurant.com options and a number of restaurants run them.

"I think the challenge with the daily deal model is you can run into a situation where your service levels drop and you're operationally challenged to serve the crush. You lose money. You're really counting on your ability to turn that crush of coupon-crazed people into regular buyers. Daily deal purchasers are not really that interested. They got a deal and they're using it. We send a steady stream," he said.

"Our customers are diners -- and they're diners first -- and they like to save money. We find it tends to be a really good relationship."

Krohn likens restaurant.com to a digital model of the coupon book.

Krohn said the deals are concentrated in urban areas and unlike some other sites, the reviews are from verified diners.

"No shills and none of the other complaints you see about some of the rating sites. We know that the reviews are only written by people who purchased the deal and dined in the restaurant. ... What's interesting is when we compare that restaurant review and star ratings to the generic rating sites that are out there, the average restaurant scores more than a star better," he said.

Advertisement
RELATED Consumer Corner: Thanksgiving is coming and Butterball is ready to help

The site has been around for a dozen years and through several incarnations, first as a site building websites for restaurants, then selling discount certificates on eBay and now selling directly to consumers.

Groupon also is expanding its reach to point-of-sale solutions that run on iPads for restaurants and bars with a system called Breadcrumb.

ViewSonic is displaying interactive menu boards -- both large display boards and table mounted individual displays that serve up "everything from a restaurant menu and ordering system to a product information navigator," the company said.

CaptureCode said it has created the "first true mobile" app for iOS and Android to integrate marketing programs to help restaurateurs understand from where their customers are coming.

Want to eat healthier? LoSalt makes sodium-reduced salts that can be served table-side in little packets like sugar.

The show, which runs through Tuesday at McCormick Place, also features myriad food preparation options, everything from sauces to soup bases to prepared mushrooms to desserts. New refrigeration systems, food-preparation and cleaning equipment, restroom solutions and other industry-related equipment will be on display. 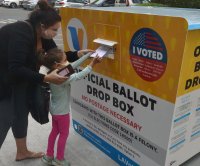 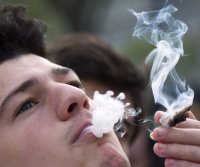