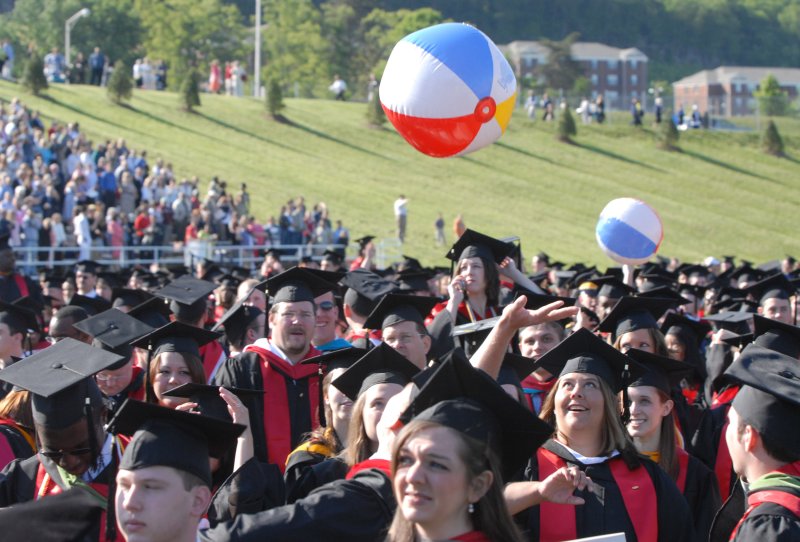 Graduates play with beach balls before their commencement ceremony at Liberty University in Lynchburg, Virginia on May 19, 2007. (UPI Photo/Alexis C. Glenn) | License Photo

CHICAGO, July 24 (UPI) -- The lingering effects of the recent recession, which left more than 14 million Americans unemployed and little hope of a hiring binge in the offing, have people wondering whether spending tens of thousands of dollars on a college education is worth it.

The short answer according to economists is yes -- in the long run as long as students seek training for high-paying, secure professions. In the short term, however, the prospect of incurring thousands in debt from student loans has both students and their parents quaking.

U.S. Census Bureau figures indicate 70.1 percent of the high school class of 2009 enrolled in college; however, three-quarters of those in the lower 40 percent of the class probably won't graduate if historical trends hold. And the cost -- even if it's for a year or less -- is growing as state aid appropriations are shrinking. The 2006 American Community Survey by the Census Bureau found 19.5 percent of Americans had attended college but not graduated, 7.4 percent had an associate's degree, 17.1 percent had a bachelor's degree and 9.9 percent had a graduate or professional degree.

A survey released by Country Financial of Bloomington, Ill., found Americans are growing wary of student loan debt, which averages $29,000 for a four-year degree, with 26 percent saying college is not a good investment and 23 percent saying parents should foot the entire bill.

"College is a long-term investment and having a degree significantly increases your earning potential," Keith Brannan, vice president of financial security planning, said in a release.

The cost of a college education varies widely -- from less than $2,600 a year in tuition and fees at community colleges to more than $41,000 at some private, four-year institutions (the average is $27,293). And then there's room and board -- add on $10,000 more annually -- no matter where one goes to school. Those paying out-of-state tuition will add an average $11,990 to their tuition bill. Some $154 billion was available in financial aid for the 2009-10 school year, with the average award $11,500 including $6,000 in grants that do not have to be repaid, the College Board's Trends in Student Aid survey indicated.

Georgetown University's Center on Education and the Workforce found a degree in engineering can be worth more than $1 million more in lifetime earnings while a degree in education can be worth $241,000 more. The Hamilton Project, an economic policy program sponsored by the Brookings Institution, put the average value of a college degree at $570,000 on an average $102,000 investment.

Among the most stable job tracks were geological and geophysical engineering, military technology, pharmacology and school student counseling, while the areas with highest unemployment included social psychology, nuclear engineering, and educational administration and supervision.

"The bottom line is that getting a degree matters, but what you take matters more," said Anthony P. Carnevale, director of the Center on Education and the Workforce.

Michael Greenstone and Adam Looney of The Hamilton Project agree.

"Higher education is a much better investment than almost any other alternative, even for the 'Class of the Great Recession' (young adults ages 23-24)," they said on the project's Web site. "In today's tough labor market, a college degree dramatically boosts the odds of finding a job and making more money. …

"The evidence clearly shows more education improves your chances in the labor market, in both good times and bad. Yet over the last 40 years, increases in college attainment have slowed considerably, especially for men. Given these results, the real mystery may be why more people aren't going to college or getting a two-year degree."

In May, the Hamilton Project found 88 percent of new college graduates had jobs with an average $581 in weekly earnings, compared with $305 for those with only a high school diploma. Before the recession hit in 2007, recent college graduates were earning $86 per week more than those without a post-high school education.

Odd News // 5 hours ago
Reptile wrangler removes snake from toilet at Australian home
Jan. 27 (UPI) -- A snake catcher in Queensland, Australia, responded to a home to help with an unusual situation -- a 4-foot snake in the toilet.

Odd News // 6 hours ago
Fish spends owner's money, reveals credit card info on YouTube stream
Jan. 27 (UPI) -- A Japanese YouTuber created a custom setup to allow his pet fish to play Pokémon on his Nintendo Switch, but a malfunction led to the fish spending money at the eShop and revealing its owner's credit card information.

Odd News // 6 hours ago
Mouse at San Diego Zoo believed to be world's oldest at 9 years old
Jan. 27 (UPI) -- Officials with the San Diego Zoo said it is seeking Guinness World Records recognition for a Pacific pocket mouse believed to be the oldest in the world at the age of 9.

U.S. News // 6 hours ago
San Francisco court releases Paul Pelosi attack video
Jan. 27 (UPI) -- The police video of the Oct. 28 hammer attack on Paul Pelosi was released Friday by a San Francisco court. It shows the assailant and Pelosi both grasping a hammer held by the attacker, who then suddenly strikes Pelosi.

Odd News // 7 hours ago
Massive eel found washed up on Texas beach
Jan. 27 (UPI) -- A Texas researcher captured video of a rare discovery he made on a beach -- a 4-foot long American eel.
Advertisement