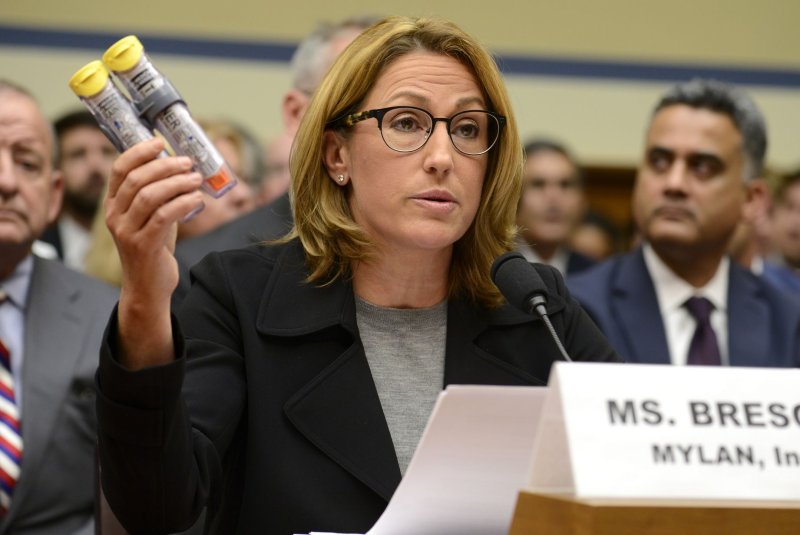 Mylan CEO Heather Bresch holds up a sample of the company's two-pack EpiPen as she testifies before the House Oversight and Government Reform Committee, on Capitol Hill in Washington, D.C., September 21. The company announced Friday a generic version of the two-pack will be available for half the price next week. File photo by Mike Theiler/UPI | License Photo

CANONSBURG, Pa., Dec. 16 (UPI) -- Mylan N.V. announced a half-price generic version of its EpiPen will be available next week after the company was criticized for significantly raising the price of its auto-injector, used to treat severe allergic reactions.

The generic drug will reach pharmacies starting next week, and has the same drug formulation and device functionality as the EpiPen Auto-Injector, the company announced. The product will be injected the same way as the original, which has been on the market for 30 years.

The price hikes and lack of a generic version led to congressional inquiries, a Justice Department investigation, state lawsuits and a $465 million settlement for Medicaid overbilling.

"Americans are rightfully concerned about rising drug prices, and now more than ever patients and families across this country are standing at the pharmacy counter struggling to pay for their medications," Mylan CEO Heather Bresch said in a statement. "While it is important to understand the outdated and complex system that determines what someone pays for medicine in the U.S., hardworking families don't need an explanation, they need a solution."

The company has raised the price of the injection to $608 for a two-pack from $57 per shot when it took over production of the product in 2007. In August, Mylan said it would sell two generic injection pens for $300.

"Unfortunately, families will continue to face sticker shock for medications and may be forced to make difficult choices until the pharmaceutical pricing system is reformed to address the increasing shift of costs directly to consumers," Bresch said. "Pharmaceutical pricing is too far removed from the patient at the pharmacy counter and not designed for today's increasingly consumerized healthcare system."

Mylan also said it is offering a savings card for eligible patients with commercial health insurance, providing up to $25 off the out-of-pocket cost for the authorized generic. Mylan said it will continue to offer its patient assistance program to support uninsured and underinsured patients. More information about these programs can be found on Mylan.com/EpiPenAccess.

The company earlier reduced the patient cost of pens through a savings card, which covered up to $300 for a two-pack.

In August, Mylan agreed to pay nearly half a billion dollars to settle allegations it overcharged Medicaid for the injectors.

The U.S. Justice Department is investigating whether certain generic-drug companies colluded on price, The Wall Street Journal has reported.

In September, Mylan said it makes $166 profit on the two-packs. During a House Oversight and Government Reform Committee hearing, Bresch said it makes $100 per order. But Bresch didn't include a 37.5 percent statutory U.S. tax rate.

Last year, Mylan sold $1.5 billion in EpiPens that accounted for 40 percent of the company's total sales. Its market share is 90 percent because it has only one competitor, Adrenaclick.

Defense News // 10 hours ago
Air Force secretary: Branch focused on confronting China, must retire old platforms
Sept. 20 (UPI) -- Air Force Secretary Frank Kendall said the branch is looking toward confronting China, as well as unity in its ranks, and added that the service needs to retire older aircraft and programs -- and focus on ones that work. 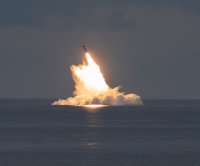