Netflix announced it missed subscriber growth numbers in the second quarter due to a price increase. Shares fell 13 percent in Monday trading on the news and could continue to fall when markets open on Tuesday. Reed Hastings, Netflix co-founder and CEO talks to CES trade show in January. Photo by Molly Riley/UPI | License Photo

The streaming video company added 160,000 customers in the United States and another 1.52 million abroad, but those numbers were still well below expectations. Netflix had hoped to add 500,000 domestically and 2 million internationally.

The Los Gatos, Ca. company still has 83.18 million subscribers but shares fell 13 percent in after-hours trading Monday and have dropped 14 percent for the year.

A majority of U.S. subscribers remain under a lower subscription rate, but will be see their monthly rates raised $1 or $2 later this year.

Netflix stock could fall a quarter of its value this year if the drop continues when markets open on Tuesday. But share values for the company can be more volatile than others due to investors high expectations of how Netflix is shaping TV viewing.

"The shares are down because their domestic subscriber growth slowed to a crawl," Wedbush Securities analyst Michael Pachter said. "And domestic profits fuel their international losses." 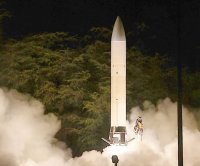