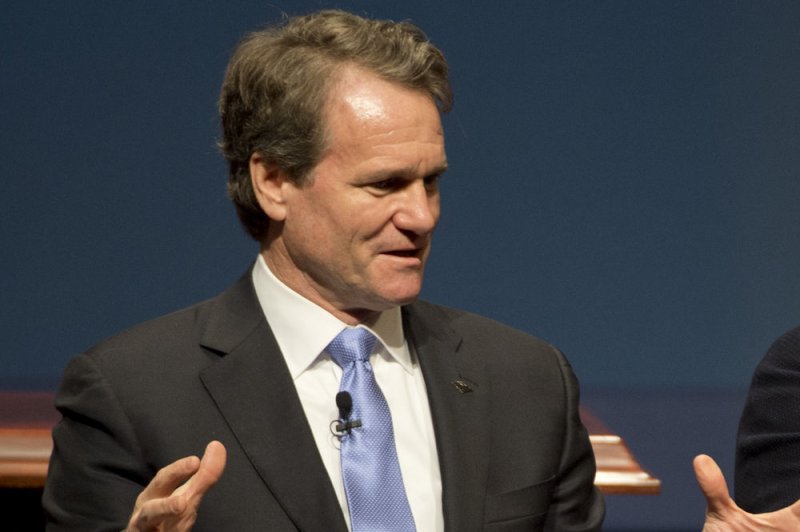 Bank of America CEO and Chairman Brian Moynihan speaks during a panel discussion at the Summit on Cybersecurity and Consumer Protection at Stanford University in Palo Alto, Calif., on February 13. Tuesday, Moynihan will face a contentious shareholder vote that may require him to drop his role as chairman. Photo by Terry Schmitt/UPI | License Photo

CHARLOTTE, N.C., Sept. 20 (UPI) -- Bank of America shareholders will vote Tuesday whether to allow Chief Executive Officer and Chairman Brian Moynihan retain his dual roles after a groundswell of criticism the combined job puts too much power in a single pair of hands.

The vote will allow shareholders to ratify the board's year-old decision that gave Moynihan both titles, something many contend undermined shareholders' authority and reversed a 2009 decision to split the roles.

"This is not a referendum on Brian Moynihan's leadership as CEO. It's about a fundamental belief in the need for independent board leadership," said New York City Comptroller Scott Stringer, who oversees the $165.5 billion New York City Employees' Retirement System.

As many as 40 percent of shareholders are expected to vote against Moynihan, leaving 60 percent in question. If shareholders at Bank of America decide the jobs should be split, Moynihan would retain the role of CEO and a separate chairman would be chosen.

Bank officials who back Moynihan in both positions say he effectively steered the company through the costly acquisition of Countrywide Financial and 2008 and Merrill Lynch in 2009. They say there's no evidence to suggest a separate CEO and chairman would perform better.

"Since Mr. Moynihan's appointment as C.E.O. in January 2010, the company has continued to underperform, has failed important Fed stress tests, and has perpetuated a subpar engagement with its shareholders," the California pension funds wrote in a joint letter to the bank's lead independent director last month. "Given these missteps, we do not believe now is the time to reduce oversight of management by combining the roles of C.E.O. and chair."