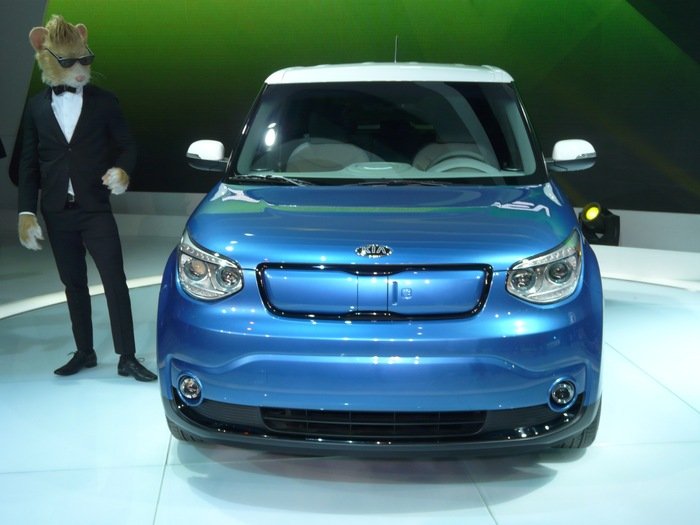 The 2015 Kia EV, Kia's first all-electric vehicle, was unveiled at the Chicago Auto Show on Feb. 6, 2014.The Soul EV goes on sale later this year in California and Oregon. UPI

"We see it serving as a halo vehicle for brand," said Michael Sprague, Kia's vice president for marketing and communication at the auto show press preview.

The Soul EV has a 27kWh lithium-ion polymer battery with a 200 watt-hour/kg energy density and a real world range of 80 to 100 miles on a single charge.

The front-wheel drive Soul EV gets 109-horsepower from an 81.4kW electric motor generating 210 pound-feet of torque. Zero to 60 time is around a leisurely 12 seconds with a top speed of 90 mph.

The car's regenerative braking system feeds energy back into the battery and the Soul EV uses 10.9 pounds of bio-based organic content in interior plastic.

"The Soul EV retains the fun and funky style as well as the packaging efficiency and utility that have made the gasoline-powered Soul such a huge hit with consumers," said Orth Hedrick, Kia's vice president of product planning for the United States. "And to that winning combination it adds usable real-world range and multiple charging options, making it the perfect EV for everyone."

The Soul will be sold initially in California and Oregon when it goes on sale later this year and be available in New York, New Jersey and Maryland in early 2015. Pricing was not announced.

Kia also showed the freshened 2014 Optima Hybrid, which gets 38 mpg, and the Niro hybrid concept, a crossover utility powered by a 160-horsepower, 1.6 liter turbocharged hybrid-electric drivetrain paired with a seven-speed transmission.