Federal Reserve to pull back on asset purchases

WASHINGTON, Dec. 18 (UPI) -- The Federal Reserve said Wednesday it will begin in January to pull back on asset purchases by $10 billion per month because of an improved employment outlook.

The central bank's Federal Open Market Committee said in a statement it will reduce mortgage-backed asset purchases by $5 billion to $35 billion per month and drop its Treasury securities purchases from $45 billion per month to $40 billion, due to "growing underlying strength in the broader economy."

"In light of the cumulative progress toward maximum employment and the improvement in the outlook for labor market conditions, the Committee decided to modestly reduce the pace of its asset purchases," the statement said.

The Fed said the economy is expanding "at a moderate pace ... [and] labor market conditions have shown further improvement" even though the unemployment rate remains "elevated."

"The [Open Market] Committee sees the risks to the outlook for the economy and labor market as having become more nearly balanced," the Fed said in a statement.

The Fed said the federal funds rate would remain at zero to 0.25 percent and changed its guidance on the rate, saying it would remain at that rate "at least as long as the unemployment rate remains above 6.5 percent."

Fed Chairman Ben Bernanke told reporters at a news conference he expects the federal funds rate will remain low even beyond the point when the unemployment rate reaches 6.5 percent.

"The recovery is far from complete," he said, adding that the Fed's committee members were "disappointed in the pace of growth." 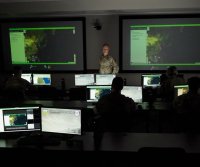