A 2013 Ford Fusion is shown during the Chicago Auto Show at McCormick Place on February 9, 2012 in Chicago. UPI/Brian Kersey | License Photo

A Chinese worker cleans a new Ford Explorer SUV on display at the world's biggest automobile show, Auto China 2012, during a pre-opening day show in Beijing on April 23, 2012. China is the world's largest automobile market, with international car makers setting up massive plants and dealerships across the country in hopes of gaining a share of the fast growing domestic market. UPI/Stephen Shaver | License Photo

A cross-section of the engine of a Ford Explorer with Ecoboost is shown during the Chicago Auto Show at McCormick Place on February 9, 2012 in Chicago. UPI/Brian Kersey | License Photo

The Cadillac logo is displayed at the 2013 North American International Auto Show in Detroit on January 14, 2013. UPI/Brian Kersey | License Photo

The Detroit Three automakers are scaling back their annual summer production shutdowns to keep up with demand for top-selling models.

General Motors, Ford and Chrysler usually idle plants for re-tooling and maintenance in July, but for the second consecutive year Ford is cutting back shutdowns in Chicago; Louisville, Ky.; Wayne, Mich.; Oakville, Ontario.; and Cuautilan and Hermosilo, Mexico, from two weeks to one week at North American plants that assemble the Explorer, Fusion and F-series pickups.

Ford said the extra week's production would boost car and light-truck production by 40,000 vehicles and that autoworkers can make up their vacations later. Ford's U.S. market share is up nearly a full point -- to 16.3 percent – from April a year ago, Automotive News reported. Ford hopes to build an extra 200,000 vehicles this summer.

"To meet surging customer demand for our top-selling cars, utilities and trucks, we are continuing to run our North America facilities at full manned capacity," said Jim Tetreault, Ford's vice president in charge of North American manufacturing in a statement.

"Approximately 75 percent of our plants are running at a three-crew, three-shift or four-crew pattern in order to ensure we're getting more of our products into dealerships."

Even with the added production supplies of the popular midsize Ford Fusion are expected to be tight.

Chrysler plans to keep three plants that assemble the Jeep Grand Cherokee, Dodge Durango and Viper sports car running all summer and will idle four other plants in Belvidere, Ill.; and Toluca and Saltillo, Mexico, for just one week. The Belvidere plant makes the compact Dodge Dart, which Chrysler views as key to increasing U.S. market share.

General Motors Co. , which hasn't had a companywide two-week summer shutdown since emerging from bankruptcy in 2009, plans to keep plants making the Cadillac ATS and CTS, and full-size SUVs and pickups producing all summer.

Other GM plants will be scheduled for summer shutdowns based on vehicle life cycles and market demand, a GM spokesman told The Detroit News.

Most new cars to have four-cylinder engines

RELATED Auto Outlook: The end for the Coda EV

You could stomp on the accelerator and watch the gas gauge plunge downward.

I loved that four-banger and my latest vehicle also has four cylinders as do more than half of all new vehicles sold in the United States these days.

Part of the reason for the renaissance of the four-banger: the strict Corporate Average Fuel Economy standards that will require automakers to achieve a fleet-wide average of 54.5 mpg by 2025.

"I think it's maybe a stretch. But I don't find it implausible," Edmunds.com senior editor Bill Visnic, told The Detroit News.

RELATED Auto Outlook: Driving costs up, what is 'American-made'?

That's because the majority of gas-electric hybrids have small four-cylinder engines to recharge their batteries and most small crossover SUVs have fours to boost gas mileage, but pickups still have more powerful six- and eight-cylinder engines.

"Four-cylinder engines, especially when turbocharged, are often more powerful and always more fuel-efficient than even the best V-6s available on the market just a few short years ago," Kelly Blue Book senior analyst Alec Gutierrez told the News in an email.

The Insurance Institute for Highway Safety, an independent group that crashes cars with test dummies and reports the findings, says only the 2014 Subaru Forester was rated good in its overlap front crash test.

In the test, 25 percent of the driver's side of a vehicle plows into a rigid stationary barrier simulating a tree or telephone pole at 40 mph to test the integrity of the vehicle's structure.

The redesigned Forester was only one of 13 compact crossovers SUVs tested to earn the highest crashworthy rating with the 2013 Mitsubishi Outlander Sport getting a second-best rating of acceptable.

The 2014 Toyota RAV4 will be tested later this year.

"Nearly every new car performs well in other frontal crash tests conducted by the institute and the federal government, but we still see more than 10,000 deaths in frontal crashes each year," Institute President Adrian Lund told The Detroit News.

IIHS vice president for vehicle research Joe Nolan said because the impact is outside of the vehicle's main crush-zone there is a higher risk of severe damage and injury to the occupants.

In the Jeep Patriot, the steering wheel moved up eight inches and right nearly six inches pushing the crash test dummy's head off the front airbag and the side curtain air bag did not deploy.

Nolan said the Forester was the first small SUV to receive an overall good rating and Top Safety Pick honor in the test.

"With the redesigned Forester, Subaru's engineers set out to do well in our new test, and they succeeded," he said. "This is exactly how we hoped manufacturers would respond to improve protection for people in these kind of frontal crashes."

The Forester was named the pick of the litter in the hotly competitive small SUV segment by Consumer Reports -- which cited the Subaru's large windows, wide doors and spacious cabin that efficiently uses space without compromising visibility.

CR also praised the Forester's segment-leading mileage of 26 mph city and 35 mph highway but criticized its jittery ride -- it has a continuously variable transmission -- saying it was not as sporty as the Ford Escape, Mazda CX-5 or Toyota RAV4.

The automaker, riding the success of a Model S sports sedan that costs a minimum of $62,000 after tax credits, has delivered nearly 10,000 electric vehicles since its founding in 2003. The company builds the car in Fremont, Calif., and now has about 3,000 employees.

It obtained the loan in 2009 as part of a special federal program to encourage development of alternative fuel vehicles and renewable energy sources, and so far it has done both right.

Consumer Reports recently rated the Model S sports sedan 99 out of 100, and Tesla was able to raise $900 million in stock and debt offerings and remains a Wall Street darling.

"I would like to thank the Department of Energy and the members of Congress and their staffs that worked hard to create the ATVM program, and particularly the American taxpayer from whom these funds originate," said Tesla's Chief Executive Officer Elon Musk. "I hope we did you proud."

Tesla is adding a sport utility vehicle, the Model X, to its lineup and plans to expand overseas sales.

The story was different for another U.S. electric car maker, Fisker Automotive of Anaheim, Calif., which defaulted on a similar $171 million Energy Department loan last month. 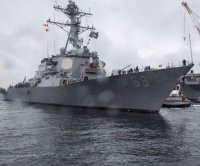