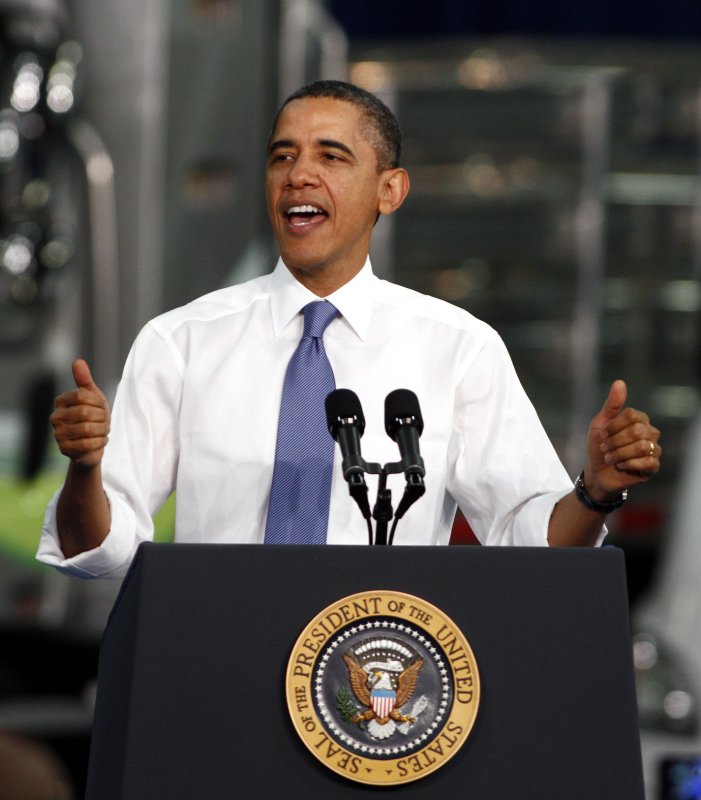 Obama also wants to spend $3.6 billion to raise tax credits for consumers who take the plunge and buy advanced-technology vehicles. The proposal would raise the current federal tax credit for purchasing an EV car or truck from the current $7,500 to $10,000 and turn it into a point-of-sale rebate.

"Here is the truth," he told workers who manufacture big rig Freightliner trucks that run on compressed natural gas. "If we are going to control our energy future then we've got to have an all-of-the above strategy. We've got to develop every source of American energy -- not just oil and gas, but wind power and solar energy, nuclear power, biofuels. We need to invest in the technology that will help us use less oil in our cars and our trucks, in our buildings, in our factories. That's the only solution to the challenge. Because as we start using less, that lowers the demand, prices come down."

Obama said his administration is working with the private sector to develop a high-tech car battery that can go 300 miles on a single charge at half the cost of current batteries.

He said being able to go two weeks between fill-ups instead of a week, would save the typical family about $8,000 a year and cut U.S. oil consumption by more than 12 billion barrels annually. New mileage standards for heavy-duty trucks could save more than $15,000 in fuel costs a year, the president said.

The government's methodology used to determine possible fuel savings was not given.

The administration proposes spending $1.7 billion to fund a new tax credit to give commercial truck buyers credit for half of the additional cost of buying an advanced-technology truck.

A National Community Deployment Challenge fund would help up to 15 communities invest in the necessary infrastructure, like charging stations for electrics, and compressed natural gas fueling stations for advanced-technology vehicles and remove regulatory barriers.

"To cities and towns all across the country, what we're going to say is, if you make a commitment to buy more advanced vehicles for your community -- whether they run on electricity or biofuels or natural gas -- we'll help you cut through the red tape and build fueling stations nearby."

Obama promised to boost incentives to prime the pump on adoption of all-electric and hybrid vehicles.

"And we'll offer tax breaks to families that buy these cars, companies that buy alternative fuel trucks like the ones that are made right here at Mount Holly," he said. "So we're going to give communities across the country more of an incentive to make the shift to more energy-efficient cars."

Taking care of the CEO

Ford Chief Executive Officer Alan Mulally, who helped engineer Ford's turnaround and keep the company from declaring bankruptcy along with GM and Chrysler in 2008, has boosted his holdings.

Mulally was awarded 4.82 million shares as part of his 2009 performance incentives. Last week, his stock was expanded by 1.28 million shares for a total pre-tax worth of some $58 million, a filing with the Securities and Exchange Commission indicated.

Despite growing sales, Ford shares are down more than 13 percent this year, trading at $12.54 Thursday -- still a more than 500 percent increase.

"Our compensation philosophy is to align the interests of our leadership with those of our shareholders," Ford Motor Co. said in a statement.

Meanwhile, in nearby Auburn Hills, Chrysler revealed in its annual report that Chairman and CEO Sergio Marchionne received no salary or stock awards last year.

Marchionne is compensated by Italy's Fiat, which owns 58.5 percent of Chrysler. He was paid about $4.5 million from Fiat as Chrysler re-organized, developed new products, and repaid all its loans to the U.S. and Canadian governments. The annual report showed he got $600,000 in stock awards from Chrysler in 2010.

Maybe it's superstition, but Fiat and Chrysler CEO Sergio Marchionne told reporters at the 82nd Geneva Motor Show in Switzerland, Dodge may delay the production launch of the new Dart compact sedan.

The Dart, Chrysler's first car based on a Fiat platform, is assembled at Chrysler's Belvidere, Ill., plant. Full production was to begin April 1 but Marchionne said it may be pushed back "to avoid being jinxed" by a launch on April Fool's Day, the Detroit Free Press said.

Marchionne also took the wraps off the Fiat 500L at the Geneva car show. The longer version of the Fiat 500 reaches U.S. showrooms next year.

About 300,000 owners of newer Ford vehicles equipped with the optional MyFord Touch and MyLincoln Touch infotainment control systems will be getting a USB flash drive containing an update in the mail.

MyFord Touch, developed jointly with Microsoft, has drawn criticism for confusing graphics, a crash-prone interface and rebooting randomly, and was cited as a negative by subscribers of Consumer Reports.

The upgrade, which has been in the works for awhile, is more intuitive and improves the system's displays and spoken commands.

The software enlarges the fonts and virtual knobs and buttons on touch screens to reduce driver distraction. Important changes, since the system also incorporates the car's climate and navigation controls.

"We expect that these improvements will put us back on track in the quality ratings. It's more than just an update. This is a substantial upgrade," Derrick Kuzak, group vice president for global product development, told The New York Times.

Ford says the upgrade, which requires the car be running, will take about an hour. It can be done by a dealer if the customer prefers.

About 80 percent of new Ford Explorers and Ford Edges are equipped with MyFord Touch, and the system will be optional on seven more Ford models and four Lincoln models this year.