The Senate must still approve the measure for it to become law.

The extraction method involves pumping a mixture of water, sand and chemicals into shale deposits underground to force the rock to break apart, allowing gas to be released.

France24 reported Thursday protesters gathered outside Parliament as the vote was taken.

Some studies have shown underground water near hydraulic rock fracturing sites have become contaminated with methane. A documentary on the subject called "Gasland" showed methane leaks have caused illnesses and even killed cattle in area where fracking techniques have been used.

The ban in France was proposed by the UMP party to appease angry citizens who had discovered the government had been issuing fracking permits to energy firms, some of them covering parts of the country's most scenic regions.

Danielle Mitterrand, the widow of former Socialist President Francois Mitterrand, was one of those campaigning for a ban on the gas production process.

"We have to eradicate the use of shale gas, we must leave our Earth alone," Mitterrand said before the vote was taken.

While the ban has become a populist cause, the size of France's gas reserves in shale formations are unknown. A European Center for Energy and Resources Security study released last week estimated Europe could have its energy demands covered for 60 years if processes like fracking were allowed.

Defense News // 6 hours ago
DoD to assess climate change effects at installations worldwide
April 22 (UPI) -- The Department of Defense has adopted and expanded a tool developed by the Army Corps of Engineers and will use it project the effects of climate change on almost 1,400 locations, the Pentagon announced Thursday. 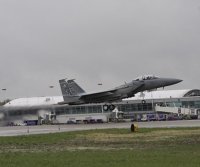