LONDON, April 27 (UPI) -- British oil giant BP said Wednesday it had discovered a Nazi mine dangerously close to a critical undersea pipeline, which could prompt a temporary shutdown.

The pipe handles 40 percent of the daily outflow from the firm's North Sea oil drilling, The Scotsman reported Wednesday.

The unexploded World War II-era mine close to the Forties pipeline is 13-feet long, the newspaper said.

BP has spelled out options, which include leaving the mine where it is or moving it for detonation elsewhere. The second option, however, would mean shutting down the pipeline temporarily, the firm said. That would halt delivery of about 500,000 barrels per day.

The 105-mile pipeline serves both British and Norwegian oil production from the North Sea.

"An unidentified object was observed lying next to the BP-operated Forties pipeline in the North Sea. The object was subsequently identified by specialists as a piece of Second World War military ordnance. It is lying adjacent to the pipeline approximately 40 kilometres [24.8 miles] off the coast from Peterhead," a company spokesman said.

He said the mine, found March 22 during a routine inspection, was not an immediate threat.

"A lot of operators feed into that pipeline, so there could be a significant knock-on effect from a shutdown," RMT union organizer Jake Molloy said.

"It could cause a number of operators a real headache."

Defense News // 2 hours ago
Aircraft carrier captain dismissed after sounding alarm on COVID-19 outbreak
April 2 (UPI) -- Navy Capt. Brett Crozier, who earlier this week pleaded with Navy officials to provide more resources for sailors amid a coronavirus outbreak on the USS Theodore Rooosevelt, has been relieved of his position.

Defense News // 3 hours ago
Comfort, Mercy take small number of referral patients so far
April 2 (UPI) -- The Navy hospital ships deployed in March to help cope with an expected overflow of patients due to COVID-19 have treated less than 20 patients combined since they started

Defense News // 7 hours ago
Navy accelerating large contracts to mitigate effects of COVID-19
April 2 (UPI) -- A top Navy official said this week the branch will award some contracts earlier than planned in an effort to offset the impact of the coronavirus pandemic on the defense industry. 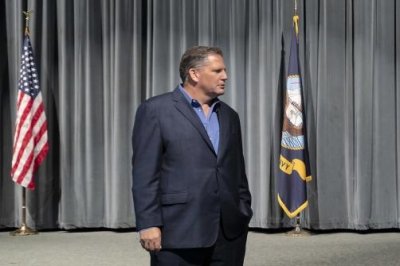