Google, based in Menlo Park, Calif., previously refused to sell sponsored links to French company NavX, which has a mapping service that pinpoints the location of speed traps on French roads, The New York Times reported.

Google based its decision on the point that devices that detect police radar are illegal in France.

Among other changes, Google, in a settlement with the French Competition Authority, said it would give three months of notice to advertisers it planned to discontinue.

Google said the settlement included "no finding of dominance or monopoly abuse" and "recognized Google's right to set clear content priorities that guarantee ads are appropriate.

Ron Soffer, an attorney for NavX, called it "a monumental event, because the French Competition Authority got Google to modify its contractual rules on a worldwide basis."

"So if you are in the shoe business in California and Google suddenly decides it doesn't like shoes, this settlement will affect you," Soffer said.

Defense News // 12 hours ago
Malfunctioning B-2 bomber damaged during landing at Missouri base
Sept. 16 (UPI) -- A B-2 Spirit stealth bomber made an emergency landing at Whiteman Air Force Base in Missouri earlier this week after the high-tech aircraft malfunctioned during a training flight. 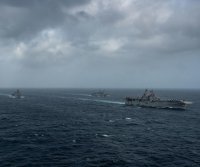 USS Germantown returns to San Diego after a decade in Japan