The GM logo is displayed at the General Motors global headquarters in the Renaissance Center on January 12, 2010 in Detroit, Michigan. UPI/Brian Kersey | License Photo

"The sad fact is GM is gone from Indianapolis. That's a fact," Davison said. "It's a sad day for Indianapolis."

UAW members at a union meeting Sunday defied Detroit union chiefs who negotiated wage cuts and expected the 650 Indianapolis autoworkers to vote Monday on a new contract with a potential buyer for the 70-year-old factory, the Star said.

"We pay the International to represent us, not commit fraud and work against us," said Gregory Clark, Local 23 bargaining chairman.

Local 23 officials refused to schedule a vote on the new measure that would lower the base wage to $15.50 an hour from $29 per hour for production workers. 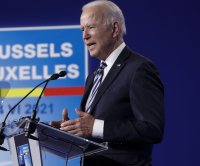 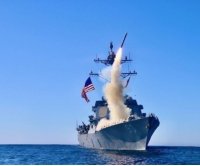