DONGGUAN CITY, China, April 14 (UPI) -- The typical workweek for teenagers at the KYE factory in China, a Microsoft Corp. supplier, is 90 to 105 hours, a National Labor Committee report said.

The report said overtime hours, even if calculated at 80.5 hours a week, exceed the legal limit in China by 388 percent.

After deductions for food, which workers described as "awful," the wage falls to 52 cents an hour.

Living arrangements include workers sleeping 14 to a room on narrow bunk beds and taking sponge baths out of small, plastic pails. Working conditions included severe overcrowding in rooms that "routinely reach 86 degrees" in the summer months.

Workers are not allowed to talk during work hours.

Defense News // 1 day ago
Raytheon UK wins contract in $1.3B Royal Navy modernization plan
Jan. 13 (UPI) -- Raytheon UK won a $200 million contract to improve the Royal Navy's training, it announced on Wednesday, part of a $1.3 billion transformation of the navy. 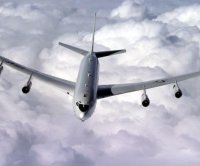 Defense News // 2 days ago
Army to review discharge status for veterans with some health conditions
Jan. 12 (UPI) -- The Army announced Tuesday that it will review the discharges of thousands of disabled veterans, which could result in an upgrade to their discharge status.