Transcript of Obama's remarks on Chrysler

WASHINGTON, April 30 (UPI) -- Following are remarks made by U.S. President Barack Obama about the situation with Chrysler LLC on Thursday in Washington.

One month ago, I spoke about some of the problems that have led to the crisis in the auto industry and about what would be required to ensure that General Motors and Chrysler emerge from their current troubles stronger and more competitive.

My team will continue working with General Motors as they strengthen their business plan and move towards restructuring that's consistent with the principles that I've laid out.

And today, after consulting with my auto task force, I can report that the necessary steps have been taken to give one of America's most storied automakers, Chrysler, a new lease on life.

Chrysler has not only been an icon of America's auto industry and a source of pride for generations of American workers; it's been responsible for helping build our middle class, giving countless Americans the chance to provide for their families, sending their kids to college, saving for a secure retirement.

It's what hundreds of thousands of autoworkers, and suppliers, and dealers, and their families rely on to pay their bills in communities across our industrial Midwest and across the country. It's been a pillar of our industrial economy, but, frankly, a pillar that's been weakened by papering over tough problems and avoiding hard choices.

For too long, Chrysler moved too slowly to adapt to the future, designing and building cars that were less popular, less reliable, and less fuel efficient than foreign competitors. That's part of what has brought us to a point where they sought taxpayer assistance.

But, as I've said from the start, we simply cannot keep this company or any company afloat on an endless supply of tax dollars. My job as president is to ensure that, if tax dollars are being put on the line, they are being invested in a real fix that will make Chrysler more competitive.

That's why I rejected the original restructuring plan that Chrysler offered last month. It was clear that if we put tax dollars in that plan, it would be a bad deal for American taxpayers and would not put the company on a viable path.

But it's also clear that, if Chrysler was able to form a partnership with the international car company Fiat, there was a chance Chrysler could have a bright future.

After consulting with my auto task force, industry experts, and financial advisors, I decided to give Chrysler and Fiat 30 days to reach an agreement. The standard I set was high: I challenged them to design a plan that would protect American jobs, American taxpayers, and the future of a great American car company.

But over the past month, seemingly insurmountable obstacles have been overcome. And Chrysler's most important stakeholders, from the United Auto Workers to Chrysler's largest lenders, from its own -- from its former owners to its suppliers, have agreed to make major sacrifices.

As part of their agreement, every dime of new taxpayer money will be repaid before Fiat can take a majority ownership stake in Chrysler. In addition, considering Chrysler's extensive operation in Canada, the government of Canada is also committing resources to ensure that Chrysler has a chance to succeed, and we're working closely with them.

It's a partnership that will give Chrysler a chance not only to survive, but to thrive in a global auto industry. Fiat has demonstrated that it can build the clean, fuel-efficient cars that are the future of the industry. And as part of this agreement, Fiat has already agreed to transfer billions of dollars in cutting-edge technology to Chrysler to help them do the same.

Now, this partnership was only possible because of unprecedented sacrifices on the part of Chrysler's stakeholders, who are willing to give something up so that this company and all the men and women whose livelihoods depend on it might see a better day.

Chrysler's management -- and in particular, its CEO, Robert Nardelli -- have played a positive and constructive role throughout this process. The United Auto Workers, who had already made painful concessions, agreed to further cuts in wages and benefits, cuts that will help Chrysler survive, making it possible for so many workers to keep their jobs and about 170,000 retirees and their families to keep their health care.

Several major financial institutions, led by JPMorgan, agreed to reduce their debt to less than one-third of its face value to help free Chrysler from its crushing obligations.

The German automaker, Daimler, agreed to give up its stake in Chrysler and contribute to the company's pension plan, further easing Chrysler's financial burden.

And countless Americans across our country will be making major sacrifices, as well, as a result of plans to consolidate dealers, brands, and product lines.

Now, while many stakeholders made sacrifices and worked constructively, I have to tell you, some did not. In particular, a group of investment firms and hedge funds decided to hold out for the prospect of an unjustified taxpayer-funded bailout.

They were hoping that everybody else would make sacrifices and they would have to make none. Some demanded twice the return that other lenders were getting.

I don't stand with those who held out when everybody else is making sacrifices. That's why I'm supporting Chrysler's plans to use our bankruptcy laws to clear away its remaining obligations so the company can get back on its feet and on to a path of success.

Now, no one should be confused about what a bankruptcy process means. This is not a sign of weakness, but rather one more step on a clearly charted path to Chrysler's revival.

Because of the fact that the UAW and many of the banks, the biggest stakeholders in this whole process have already aligned, have already agreed, this process will be quick, it will be efficient. It's designed to deal with those last few holdouts, and it will be controlled.

It will not disrupt the lives of the people who work at Chrysler or live in communities that depend on it. And it will not affect the ability of American consumers to buy a Chrysler or to get it serviced and repaired.

It's a process that has the full support of Chrysler's key stakeholders and the full backing of the United States government. And I have every confidence that Chrysler will emerge from this process stronger and more competitive.

I know that there are some who will insist that bankruptcy, even for these limited purposes, is a step that should not have been taken. But it was unsustainable to let enormous liabilities remain on Chrysler's books, and it was unacceptable to let a small group of speculators endanger Chrysler's future by refusing to sacrifice like everyone else.

It's now clear that Chrysler Financial, the institution that finances Chrysler's cars and dealers, would on its own require an unacceptably large stream of taxpayer money to remain viable. That's something I refuse to provide.

And that is why, as part of this agreement, GMAC, an independent bank-holding company that finances General Motors, has agreed to finance new Chrysler sales. We will be providing additional capital to GMAC to help unlock our frozen credit markets and free up lending so that consumers can get auto loans and dealers can finance their inventories, a measure that will help stabilize not only our auto market, but the broader economy, as well.

And tomorrow, the Small Business Administration will be announcing it is expanding eligibility for some loans to include more suppliers and dealers, including R.V. dealers.

So these are some of the steps that we're taking to make it easier for Americans to buy a car. If you are considering buying a car, I hope it will be an American car. I want to remind you that, if you decide to buy a Chrysler, your warranty will be safe, because it is backed by the United States government.

And to further boost demand for autos, we are working to accelerate the purchase of a federal fleet, and we're also working with Congress on fleet modernization legislation that can provide a credit to consumers who turn in old cars and purchase cleaner, more fuel-efficient cars.

As pleased as I am about today's announcement and about the opportunity Chrysler has to remake itself, we know that far too many Americans and far too many communities are still struggling as a result of layoffs not only at plants that produce cars, but at the businesses that produce the parts that go into them and at the dealers that sell and repair them.

And that's why, as I've discussed the last time we gathered here to talk about autos, I've named Ed Montgomery to be the director of recovery for auto communities and workers. Ed will be traveling to Michigan next week with representatives from all the key government agencies represented here, reaching out to our hardest-hit areas, cutting through red tape, ensuring that the full resources of the federal government are getting to the workers, the families, and communities that need it the most.

Now, these are challenging times for America's auto industry and for the American people, but I am confident that, if we as a nation can act with the same sense of shared sacrifice and shared purpose that's been shown by so many of Chrysler's stakeholders, if we can embrace the idea that we're all in it together, from the union hall to the boardroom to the halls of Congress, then we will succeed not only with Chrysler, we will not only see our American auto industry rise again, but we will rebuild our entire economy and make the 21st century another American century.

We have made great progress. We can make great American cars. Chrysler and G.M. are going to come back. And I am very confident that we're going to be able to make, once again, the U.S. auto industry the best auto industry in the world.

And I want to thank my entire auto team who worked so diligently on what I consider to be a much better outcome than it looked like we were going to see 30 days ago.

Thank you very much, everybody.

Defense News // 5 hours ago
U.S. not prepared to defend against AI-based attacks, report says
March 2 (UPI) -- The federal government is not prepared to address threats posed by the increased adoption of artificial intelligence, according to a new report from the The National Security Commission on Artificial Intelligence. 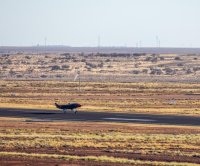 Defense News // 10 hours ago
Air Force shifts to operational camouflage, allows shorts on hot days
March 2 (UPI) -- Air Force members will be able to wear shorts while working in hot temperatures, the branch announced on Tuesday -- along with a series of other changes to its dress code and two uniform announcements.

BAE awarded $58M to start production of EPAWSS for F-15s