VALOGNE, France, May 6 (UPI) -- Voters go to the polls here in a few weeks to voice their opinion on both the question of Europe, and the leadership of President Jacques Chirac. If they could, they would vote "no" on Chirac, and -- then, probably, albeit narrowly -- "yes" on Europe.

Unfortunately for the French, the only question on the ballot concerns Europe. The only way, in their mind, to register their extreme frustration with le Ancien Regime of Chirac is to vote "no" on the European Union constitution. Therein lies the problem for the French, and investors.

After a dozen polls over March and April showed the EU measure going down to defeat, several straight polls in the last week of April showed a narrow margin of support. Then Chirac appeared on national television to urge support. The latest poll, taken by Paris Match after Chirac's speech, shows support slipping: A 50-50 dead heat. What is going on?

The irony, of course, is rich. France would seem to have the most to lose from a collapse of the EU, which is at least possible in the aftermath of a no vote.

France, like Germany, has managed to secure psychological leadership and leverage in the EU. Both nations have won repeated exemptions from the EU fiscal coordination targets. A common Europe is the only realistic counterweight to American foreign policy, and to trade and economic leverage with China and the United States -- both vital French aims.

How is it, then, that support for the new EU constitution is not only in some danger in France, but in fact now running in the low 40s in repeated polls?

In my own opinion, the problem lies in several errors by the EU itself and by Jacques Chirac in France. These mistakes are worth reviewing because they may point to broader trends in Europe that go to the competence of leadership and voter attitudes in Europe generally -- but especially in France and Germany.

Even assuming France votes "yes," there are long-run problems in the EU. France should be one of the constitution's strongest supporters. Referenda later this year and in 2006, and even some parliamentary votes, will be difficult -- even following a Blair re-election in Britain and an at-best narrow victory in France.

The tactical mistake was to place the EU question on the ballot as a single item -- rather than holding the vote during the regular cycle with many races at stake. "Special elections," as William Proxmire noted in 1957, shortly before he vanquished a legend in Wisconsin politics (Walter Kohler) in an August, one-item vote, "are protest elections."

A vast majority of Frenchmen would have voted (and will vote) for or against the EU under any circumstances, and on the merits of the issue itself.

But a large segment of French opinion is very concerned about other things as well -- such as the incompetence of French economic policy over the last several years, leaving unemployment in double digits even as Britain, America, and Switzerland enjoy jobless rates in the 5 percent vicinity.

Right now, though, French opinion is frustrated with Chirac. Frenchmen agree with his policy of staying out of the Iraq war, but not his manner of doing so, which seemed aimed at raising maximum (rather than minimum) conflict with America. They want economic growth, even if they do take the streets when even modest labor reforms or spending cuts are advocated. (My own guess is, something more radical, like a badly needed French tax rate cut, would excite no more opposition than timid measures, and would energize more support.)

In a general election, or with some other questions to vote on, Frenchmen could vote against Chirac, for some of his party members, against others -- and, in short, have many items on which to vent their anger and hopes. (This happened in Spain earlier this year, where the constitutional referendum passed easily.) Then they could vote on the EU based on -- well, based on how they feel about the EU. In this election, they have no such option to segment their basic message: "whatever you're doing isn't working."

This frustration overlaps with a second concern with the EU and its constitution, present in France much of Europe. While democratic in nature, assumptions, and rhetoric, the constitution contains no provision for EU-wide initiative and referendum -- and, of course, will leave many individual countries without it at the national level either. (When legislatures deign to allow a direct policy vote, but voters can't force one, than the country has a discretionary referendum, but no right to "initiate" popular legislation.)

For years, such pro-Europe intellectuals as Switzerland's Andreas Gross have agitated intelligently for a European initiative and referendum provision. Alas, they weren't heeded. Such a measure would be a key instrument to building a true European polity and European citizen, as it was in bringing a divided Switzerland together after the civil war of 1847.

As well, this safety valve would give voters throughout Europe (and France) the feeling that they will have an opportunity to edit, if you will, the drafts of the constitution-makers. At present, to the French voters who spoke to me, Europe seems to mean chiefly the addition of yet another layer of political elites. If the constitution as written is approved, they will have local bureaucrats, bureaucrats in Paris, and bureaucrats in Brussels to deal with.

A provision for direct democracy would give voters confidence that, in the coming years, they can fix small errors and large ones, and direct Europe on the course they want. Without it, they feel they may never have another chance to force their leaders to change course. In the 150 years that followed the Swiss constitution of 1848, Switzerland amended its constitution more than 50 times. The knowledge that they would be able to do so, of course, was a powerful confidence-builder during ratification.

The lack of it, by contrast, in the EU vote, leads the French and others to fear, this next vote may be their last chance to express themselves on Europe, ever. What if the French want "Europe," but not this particular constitution? Their only way to have that is to vote "no," and hope for a better draft, or so they fear.

Some months ago, one of the world's most original political minds, "Populism and Elitism" author Jeffrey Bell, suggested that the EU's framers probably erred in excising even some rather vague and non-programmatic references to God and to the religious basis of public institutions in the constitution. The thought has received little coverage, and, truth be told, didn't strike me as terribly important at the time. In retrospect, however, this may have been another mistake.

This is not to suggest that Europeans have any strong urge to adopt an Islamic-style intermingling of religion and the state. Far from it. Still, the strong anti-religious tone of the EU in recent years -- as when an Italian cabinet member was blocked from EU service because he was a pro-life activist -- does concern a substantial plurality of Europeans. Europe, and France, do not want a theocracy. Yet neither, it seems, are they comfortable with what might be called a kind of anti-religious zealotry, a desire to expunge and isolate all religion as if it were some kind of virus.

Alexis de Tocqueville -- the famous author who is not so famous, but should be, for his years of service in the parliament, representing this region of Normandy -- was a consistent voice against clericalism, but also against anti-clerical extremism in the French assembly.

France could use his voice, or one in his spirit, today. In the meantime, Europe's politicians seem to have moved sufficiently close to the anti-clerical extreme to concern many swing voters.

MON WAY OR THE HIGHWAY

There is still an under-appreciated chance that the matter can be turned around in the weeks to come. Yet in recent days, the French government almost seems at pains to alienate whatever opinion streams may yet be open-minded. Chirac and others in Europe have stressed that any vote against this particular constitution means the end of the EU altogether. There is "no Plan B," officials emphasize. This is not helpful. French voters, of course, know perfectly well that this is what politicians always say before such a vote and that if the result is still "no," they will immediately turn about 180 degrees and begin to rebuild the dam. (This is what happened after Switzerland's rejection of full EU membership in the 1990s; the Swiss foreign ministry went back and negotiated a series of ad hoc treaties more to the liking of the voters, and which did not require the abolition of Switzerland's direct democracy.)

Still, no less than any other people, the French do not appreciate being lectured like a school child. "Vote yes, stupid," is how the all-or-nothing, apocalyptic rhetoric of the government sounds to them now. Far from assuaging public opinion by communing with its concerns, the government has treated those concerns with contempt, and thereby, exacerbated them.

(Memo to Chirac: The way to win is to take yourself out of the fray, Mr. President, rather than injecting yourself. Have a debate, as Mitterand did on the eve of the original EU treaty vote, but use a surrogate. Find a soft-spoken, centrist politician who is not a partisan or enemy of religion -- the closest incarnation of Alexis de Tocqueville available today -- to do it. Someone who will agree with most of the opposition's criticisms of you, but nevertheless urge Frenchmen to use their ballot to express an opinion on the EU in 2005, and on Chirac, later. Incidentally, this self-abnegating approach will raise your own political standing.)

It is tempting, even at this late date, to short the French stock market. The decline of Europe's economy, however, especially France and Germany, is already so advanced that it's hard to anticipate much more bad news that isn't already in the market. And the prospect of a turnaround and a French "yes" vote, following a likely Blair win in Britain, might mark the lows for European equity markets.

The prospect of a French "no" vote, then, simply adds force, as if more were needed, to the logic of a position long the dollar against the Euro. In the event matters turn around and France votes yes, a brief Euro-relief rally will be an opportunity to increase the short position. Still short the Euro.

(Gregory Fossedal, foss@upi.com, is an advisor to investors on global development trends and ideopolitical risk, and a research fellow at the Alexis de Tocqueville Institution, adti.net. His clients may hold long and short positions in many of the investment securities and opportunities mentioned in his reports. Investors should perform their own due diligence and consult their own professional advisor before buying or selling any securities. Mr. Fossedal's opinions are entirely his own, and are not necessarily those of his clients or AdTI. Furthermore, they are subject to change without notice.) 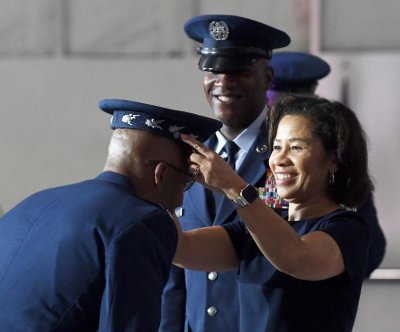 Defense News // 56 minutes ago
Senate passes bill to expand suicide prevention for veterans
Aug. 6 (UPI) -- The Senate has passed a bill that would expand mental health care for transitioning service members and create a grant program for local organizations that work with veterans. 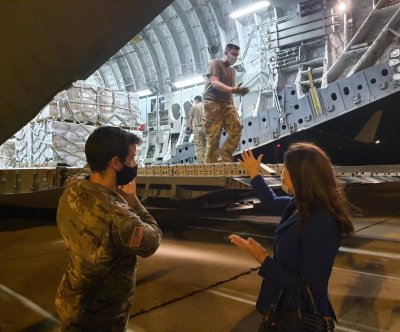 Defense News // 2 hours ago
Marine Corps to end troop rotations in Norway
Aug. 6 (UPI) -- The Marine Corps announced Thursday that it is ending continuous troop rotations to Norway, where hundreds of troops have been deployed for the last three years. 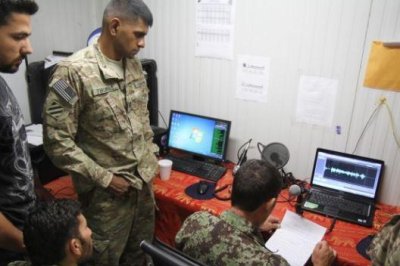