NEW YORK, March 2 (UPI) -- In the days following the 9/11 attacks, few people had high expectations for the countries of the Middle East and South Asia. The world's most prosperous economy was shell-shocked, its stock market closed and transportation system frozen. War loomed, almost certainly for Afghanistan, and quite possibly for such neighbors and sometimes terror havens as Iran and Iraq.

Pakistan's Pervez Musharraf sat, in many ways, at the crossroads of this emerging cauldron, awaiting what some Bush Administration aides now unabashedly call "World War IV." The orchestrator of an October 1999 coup, Musharraf hadn't even fully consolidated power, particularly with Moslem extremists friendly to Afghanistan's Taliban. Externally, his overthrow of an elected government, if a corrupt and hapless one, had put a chill on relations with the U.S. and Europe.

If Pakistan's strategic picture was poor, its economy, especially in light of the real prospects of a regional war, was as bad or worse.

More than 30 percent of the country was poor or extremely poor -- up from 18 percent in 1990 -- according to a U.N. survey by Akmal Hussain. Of these more than two thirds were in poor or very poor health. Literacy rates varied between 35 and 55 percent. The average Pakistani had debts of approximately 140 percent of a stagnant personal income, in many cases merely to finance current consumption. Pakistanis surveyed about their efforts to gain employment generally reported "lack of connections" as a primary problem, a sign of crony-capitalism choking off opportunity and growth.

Pakistan's government debt service burden rose to 60 percent of output in 2000 from 19 percent in 1980; the military chewed up another 20 percent; this left 20 percent for everything else. Output growth slowed in the 1990s, and there were few productivity increases or investment to provide a base for expansion. Major exports plunged more than 25 percent in 2000-2001, with economic growth at close to zero in per capita terms -- leaving Pakistan, with less than $500 income per head, below China and India, and falling further behind every year.

Worse, at least according to most analysts, policy trends suggested little turnaround. The Heritage Foundation's rankings of economic freedom for Pakistan, from 1990 through 1999, were consistently around 3.5 -- on a scale of 1 to 5 in which 1 is the best, 5 is the worst -- and were generally declining.

At this point, even as Mr. George Bush rallied Americans with a megaphone at Ground Zero, Musharraf made the two critical decisions of his political career.

First, he cast his lot with the U.S. and (at the time) Europe, agreeing to help clean out terror and Taliban havens in his own country and support the overthrow of Afghanistan's dictatorship next door. For this he won significant economic aid, but faced a number of threats, including at least two serious attempts on his life.

Musharraf ordered the central bank to stabilize the Rupiah, avoiding the kind of collapse seen in Argentina and nearby Turkey, and restructured the country's foreign debt on favorable terms. He won praise even from the fiscally cautious International Monetary Fund in the country's most recent Article IV reviews.

All of these measures look easy now, hindsight-enabled. In 2001-2002, they formed a bold gamble. Musharraf simultaneously infuriated many Moslems in his own country and the region -- especially the most violent -- and placed his trust in foreign aid, the IMF, and the U.S., led by a then-untested U.S. president suddenly committed to overthrowing the "Axis of Evil."

Second, and equally important, Musharraf implemented a series of domestic growth initiatives that were, in many ways, as bold as his foreign and domestic political strategy.

He took some of the Western aid and invested in water, farming infrastructure, and support for basic medical care. He launched an aggressive micro-credit effort to help small businesses obtain capital. This included some ill-advised efforts to impose debt relief on existing loans from the banking system, but helped produce a surge of more than 23 percent in business startup rates from 1999 to 2003.

A growing number of small businesses are headed by women, who often find it easier, as they do in many Western countries, to compete as entrepreneurs than in closed shops for jobs. In 1997, Pakistan's labor force participation rate by women was below 7 percent. It surged through 13 percent in 2003 and is likely to reach 20 percent in 2007.

Perhaps best of all, Musharraf didn't listen to the advice of a number of large employers that Pakistan needed a tax cut weighted to "business" income to be paid for by continuing high rates on human labor -- what Bottom Line likes to call the "DNA tax." Or, to be more exact, he took their advice for a time, but changed his mind in the face of facts.

From 2000 into 2001, a stream of advice-givers (the Pakistani Bar Association, the Business Council, and others) studied Pakistan's tax code and came to the near-unanimous conclusion that high tax rates weren't a problem. "Less than 2 percent of Pakistani taxpayers pay at above the 22 percent bracket" for income taxes, the tax lawyers reported.

At first, Musharraf dutifully struck out to enforce Pakistan's high tax rates on labor and corporations (for some reason, a common feature in the Arab and Moslem world) through better enforcement. "We will round them up," he promised in April, 2000. He led an armada of some 1,600 soldiers and bureaucrats around the country as part of a "tax survey" that amounted to a tax crackdown aimed at getting revenues.

But when the tax yield simply wasn't there, he instructed his top economic advisors, Finance Minister Shaukat Aziz and Ishrat Husain, Governor of the State Bank of Pakistan, to turn their eyes toward rate-lowering, loop-hole closting, base-broadening tax reform. The idea was to reward initiative, and to lure Pakistanis -- 98 percent of whom paid no tax in 2000 -- into compliance with a more reasonable code.

"The number of slabs," Aziz announced, "will be reduced from 7 to 5." (What we call "brackets," the Pakistanis, with a certain metaphorical elegance, call "slabs.") "The highest rate of taxation" on personal income, he said, would drop to 35 percent from 50 percent, albeit with a couple of surtaxes that didn't expire until 2002-2003.

Since then, Musharraf, suddenly awash in revenues, has been pruning and flattening a whole series of special rates and dreaded withholding provisions. The tax on bank income, which was 58 percent, is now 45, on its way to matching the regular corporate rate of 35 percent by 2007. (No wonder Pakistani banks were recalcitrant about non-performing loans in 1999-2000. Make a bad loan, lose the principal. Make a good one, lose two thirds of the profit.)

Not everyone is happy. Musharraf only cut the special tax on entertainment income in half; the industry wanted more. He abolished the wealth tax, but got rid of a few income tax loopholes. Musharraf raised the income beneath which one pays no federal tax to 70,000 Rupiahs, from 40,000 when he took office. "Inflation has risen," the Heritage Foundation sniffles -- to 3 percent from 2 percent.

Still, the results can fairly be called a Moslem Witrschaftswunder. Economic growth, a paltry 2 percent in 2000, topped 6 percent last year. Not enough for Musharraf, whose budget calls for 8 percent in 2005, and who recently told Western investors -- rightly -- that for a country like his, China/India-style growth of 10 percent or better should be the target.

On Sept. 15, 2001, Pakistan's stock market stood at just above 1,070. Today it's above 8,000. Interestingly, through the whole period, the Heritage economic freedom index generally rated Pakistan in the bottom third of countries in the world, and this year gave it a significant downgrade for 2004 policy changes.

Ohwell: At least the currency was strong, reserves and growth surged, and stock prices rose more than 25 percent. A good bull market takes the sting out of an "economic index downgrade."

IT'S THE POLITICAL ECONOMY

Musharraf did one other smart thing in recent years, delivering parliamentary elections as promised in 2002. (Enter the usual caveats for emerging democratic elections: The opposition parties didn't get a fair shake in the state-dominated press; the polling places weren't run perfectly; Musharraf's friends won big time; and, oh yes, he extended his term five years and declined to step down as head of the military.)

One of the most important things he can do for the economy in the future, will be to follow through with meaningful political competition and hold further elections this year, leading up to an open presidential race in 2007.

Political leaders -- once in power -- like generals and corporate CEOs, often find it difficult to understand how imposing this discipline on themselves makes for anything other than noise and confusion. After all, they know "what needs to be done," and have been on the job. Won't a big debate just produce a lot of unneeded wrangling and "slow the necessary reforms"?

In Musharraf's case, allowing the kind of competition he's encouraging for business not only strengthens consumer satisfaction and investor confidence. It's a key part of the image he's tried to project, and make a reality, for Pakistan and himself -- that of a "progressing, moderate" keystone of Islamic stability, a bridge between Turkey and India, China and the Middle East, both geographically and ideopolitically.

Pakistan has come a long way in less than four years, tempting Bottom Line to think, as in last spring's warning about U.S. pressure on the regime, that it may be an opportune time to take profits and reduce holdings. (Indeed the market corrected nearly 10 percent from April to October.)

On the other hand, Musharraf has already shown himself to be a skilled practitioner of hardball power politics in a thug-filled region, and at the same time, something of a visionary, and an economic trend-setter in the Moslem world. (It was after his tax cuts that Turkey, Israel, and India set back on the rate reduction path).

Our investors have taken perhaps a fourth of their capital off the table in recent weeks, locking in profits. But if "hold" is not an option, the buy-sell tick is still "buy." Still in.

(Gregory Fossedal is an advisor on global markets and ideopolitical risk to international investors, and a research fellow at the Alexis de Tocqueville Institution. His clients may hold long and short positions in many of the investment securities and opportunities mentioned in these reports. Investors should perform their own due diligence and consult their own professional advisor before buying or selling any securities. Mr. Fossedal's opinions are entirely his own, and are not necessarily those of his clients, UPI, or AdTI. Furthermore, they are subject to change without notice.) 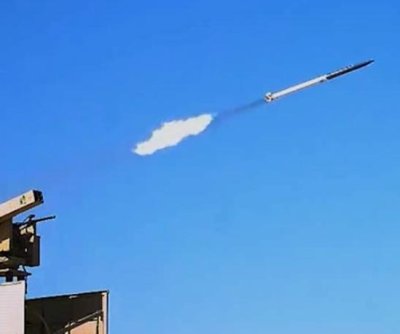 Defense News // 13 hours ago
NATO's BALTOPS 2020 exercise to involve 19 countries
June 1 (UPI) -- The BALTOPS 2020 Baltic Sea military exercise is set to kick off this week, and will occur exclusively at sea to reduce the threat of COVID-19 spread, the U.S. European Command said on Monday.