MIAMI, Jan. 28 (UPI) -- Here in the un-frozen tundra, investors generally focus on Latin America, in what is becoming the investment hub of the Southern Hemisphere. Even so, all eyes are turned -- as they are in New York, Tokyo, and London -- towards Mecca, and the most important election of the new millennium, in Iraq.

Bush Administration officials who speak of the region's "first election in 5000 years" are overstating the case. In fact, Islam, including what is now Iraq, like Protestantism, Judaism, and Roman Catholicism, has at least some democratic roots. The Middle East, including Iraq, had episodes of democracy from the first to the present century.

That caveat aside, however, the enterprise is bold and broad. It will shape politics in the region and the world, potentially for generations to come. Every country on the globe that has an opinion about the United States and that watches television, practices religion, or burns oil will be affected.

Can Islam democratize? If so -- as my own book, "The Democratic Imperative," averred in 1989 -- then the war on terror is winnable. If not, it probably isn't. If so, every man, woman, and child on the planet is better off, and every asset 10, 25, or 50 percent more valuable in years to come.

If regional stock markets are any guide, the election is already turning out to be a success. Or, at least, let us say, it is being discounted as one.

A review of the Bottom Line "Scudbelt Index," which measures the change in markets we believe are significantly correlated to geopolitical shifts in the Middle East and the war on terror, suggests a sanguine view of emerging events on the ground.

This move -- with the Palestine Index closing today at another all-time record high, closing in on 300 -- is in contrast to stagnant market prices in developed Asia, and market declines in the United States and Europe so far this year. No one believes that the fate of U.S. efforts in Iraq is the sole driver of markets in the United States or its major trading partners, of course. It's likely, though, that at least a large component of 2005's bearishness has to do with concerns both about Iraq per se, and the broader credibility and capability of U.S. military and diplomatic leverage in places like North Korea, China, and Iran.

If the move in the Scudbelt Index is any guide, Iraq's neighbors and fellow terror targets are sanguine about the likely outcome of Baghdad's balloting. While it's possible that they are wrong and more nervous investors in the developed world are right, it's more likely that investors in Egypt, Turkey, and elsewhere are simply ahead of the curve.

Success won't be determined by turnout, or even levels of violence, though a smooth process with lots of people will help. What matters in the year ahead is whether or not the new government is, well, a government -- a sovereign power capable of passing laws, managing economic affairs, and (yes) asking U.S. troops to stay or leave.

Rather, the questions are:

1. Will the new government, likely to under-represent Sunni refuseniks in the center, be both willing and able to reach some kind of post-election accommodation with the insurgents? And will it do so without compromising the validity of this election and the democratic process?

So far, the likely winners of the election, such as Shiite cleric Al Sistani, are saying and doing all the right things. Sunni leaders of the violence are not, but have everything to lose from being concessionary now, and much to gain from being so after the vote.

If the majority elected to Iraq's assembly is wise, it will devise a method for increasing under-represented Sunnis -- assuming voters in that region turn out in lower numbers -- through further balloting, rather than an elite negotiation. The latter would reinforce the idea that democracy doesn't work, and thuggery does. The former would, by contrast, reinforce the notion that all roads to power in the new Iraq pass through the ballot box.

For this reason, Bush's Jan. 27 press conference remarks should be especially helpful. After a bit of hemming and hawing, Bush unequivocally announced that if the new government asks the United States to leave, it will. This means the Iraqi people are, truly, sovereign.

As The New York Times has noted recently, Iraqis are even talking about making use of Swiss-style direct democracy to settle such questions as how to distribute the country's oil wealth, as well as the sensitive matter of whether, and in what numbers, U.S. troops should remain in the country.

If there were to be voting on such matters in the coming months, then not only would a number of questions be resolved in the best manner possible, but Iraq's energies and focus would continued to be occupied in politics and debate. Better ballot-ballot than bullet-bullet.

For markets in the region, a partial verdict is already in. Barring an unexpected disaster, Iraqi stocks, and markets in the surrounding region, should continue their climb.

There should also be a healthy boost for U.S. equity prices as well. Indeed, America having lagged the Scudbelt Index, the fact of an emerging democracy in Iraq -- troubled, imperfect, turbulent, but emerging -- should enable U.S. prices to do a bit of catch-up in the coming months.

Gregory Fossedal is an advisor on global markets and geopolitical risk to international investors, and a research fellow at the Alexis de Tocqueville Institution. His clients may hold long and short positions in many of the investment securities and opportunities mentioned in his reports. Investors should perform their own due diligence and consult their own professional advisor before buying or selling any securities. Mr. Fossedal's opinions are entirely his own, and are not necessarily those of his clients, UPI, or AdTI. Furthermore, they are subject to change without notice.

Defense News // 1 hour ago
Report: USAF covered up incidents of racial bias
May 27 (UPI) -- The U.S. Air Force tried to cover up racial bias in its justice system, a report by an independent advocacy group said Wednesday. 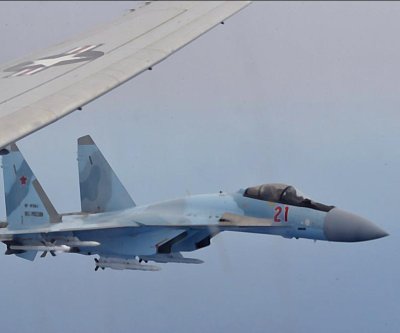 Defense News // 5 hours ago
Navy accuses Russia of third 'unsafe' intercept of U.S. plane in two months
May 27 (UPI) -- The U.S. Navy accused the Russian military of unsafe flying during an interception of a Navy plane over the Mediterranean Sea for the third time in two months.

Defense News // 23 hours ago
DoD to phase out stop-movement order
May 26 (UPI) -- The Department of Defense will lift the stop-movement order it issued earlier this spring in stages rather than keeping it in place through June 30, officials said.