Bottom Line: The 'W' in Wriston

HANOVER, N.H., Jan. 21 (UPI) -- It is fitting that only hours before George Bush's second inaugural, proclaiming America's commitment to building the Democratic Century, one of the progenitors of freedom's rise passed away. Like John Adams and Thomas Jefferson on July 4, 1826, so there is poetry this week in the passage of one of the authors of commercial and ideopolitical globalization, Citibank's Walter Wriston.

Wriston was a large man, a man of big achievements, and, occasionally, big mistakes -- a creator of wealth, and of services and products that employed thousands and improved the live of hundreds of millions.

Wriston joined the State Department's "Warehouse Wars" run by William Clayton, Paul Nitze, and others -- the effort to wear down Naziism through economic measures -- not long after U.S. entry into World War II. He joined the Army later, and served for several years, a pattern sadly uncommon among present-generation children of Congress, the Cabinet, and corporate privilege.

In 1946, Wriston joined First National City Bank (after many acquisitions and much expansion and evolution, Citibank today) as an inspector in the comptroller's division. Like Lee Iacocca at Chrysler, he built a reputation as an aggressive developer of new products, such as the credit card, and markets, such as Brazil, India, China.

By 1967, he was named CEO, serving until his retirement in 1984. He set double-digit goals, and met them -- and not through balance sheet chicanery, but by winning new customers and getting them to use (and think of) their bank as more than a mattress with interest.

Wriston was an example of another trend common in the 20th Century: A business leader who anticipated, but also helped cause, beneficial changes in government policy -- while positioning his own firm to gain from the shift. Bill McGowan, the slayer of AT & T, father of both MCI, and in these, creator of the modern telecommunications industry, was a parallel, with more of a maverick's touch.

Today many corporate chieftans proclaim themselves above or immune from the caprices of government -- and in some cases, are foolish enough to even believe it. Wriston, by contrast, knew the power of the modern democratic state, for good and ill. In this there was both philosophical wisdom, and commercial competence.

Not all of his ideas were right, as Wriston was the first to admit. "Countries don't go bankrupt," he declared in the 1970s, a few years before many of them did. In between, he had joined the overseas lending binge that nearly wrecked Chase Manhattan and others.

As a ideological globalist, but practical capitalist, Wriston reportedly had more reservations about the sovereign lending binge than have been reported. He was, in some ways, positioned between Chase Manhattan's David Rockefeller, the true pioneer of the movement, and Chase's George Champion, my late friend, who formed the loyal opposition. (Countries do go broke, Champion pointed out. And, alas, he added: "Banks don't have armies.")

As this suggests, Wriston was at his best at starting with a general trend or two, such as globalization and digitization, and applying it in concrete ways to the customer. The ATM machine -- an acronym now so common it need not be spelled out -- was one such application. Citibank's international lending on the commercial side (as opposed to sovereign bailouts) was another.

One might call the process, not globalization, but Wristonization. Many of the former's true successes rested on the kind of bottom-up, Yankee pragmatism that Wriston added.

In business and the battle of ideas, Wriston learned from his mistakes and refined his thinking. He was at first a reluctant but necessary recipient, and over time a critic, of the International Monetary Fund and its periodic bailouts. (See, e.g., his interesting 1998 interview with one of the journalists he most respected, CNN's Lou Dobbs, at www.geocities.com/Eureka/Concourse/8751/riwa/wris0921.htm.)

It was in this sphere that my only contact with Wriston took place, and at that, it was indirect. In 1985, he reportedly asked my boss at the time, Robert Bartley, "who this IMF-basher Fossedal" was -- during one of a number of Journal pieces of mine criticizing the Fund. In 1997, having grown more skeptical of the Fund's efficacy, Wriston was kind enough to tell Bill Simon he considered me "the most intelligent critic of the IMF around."

"Of course, I told him that's me," Simon good-naturedly growled in reporting the conversation. Wriston, however, demurred.

The exchange illustrates what was, for all of Wriston's abstract genius and hard-headed business mind, probably the key to the man.

It was in handling people, and understanding how central that is to success in almost any endeavor, that Wriston truly excelled. The maxims most quoted by his friends -- Brunie, the late Mr. Simon, and others -- often have to do with Wriston's thoughts about that ultimate, DNA-based source of capital, the human mind, personality, and soul.

"The person who figures out how to harness the collective genius of his or her organization is going to blow the competition away," Wriston insisted. Also, wryly: "Judgment comes from experience -- and experience comes from bad judgment." Charlie Brown couldn't have said it better.

What it all means as the world sets off on a new leg of hoped-for democratic advance and Wristonization is anyone's guess, but a few possibilities suggest themselves.

For historians and investors alike, it may be a regime-picker's market. That is to say, the megatrend has been identified. "There is a great democratic revolution among us," as Alexis de Tocqueville noted more than 150 years ago -- one abetted today by a like trend towards economic freedom, and a re-assertion of religion and values (especially in every country in the world where population is growing).

Even so, how this plays out is likely to confound the over-extrapolators and the undiscriminating, from such demoglobalists-come-lately as David Frum, to the businesses who believe "in five years, there will be no money" or "most internet sites will be in Chinese," as a pair of IBM commercials proclaimed.

Investors had a reminder of all this, this week as well, as one internet giant, the over-rated Ebay, disappointed on earnings, while another, Yahoo, enjoyed a quadrupling of profits in the fourth quarter. Yahoo -- incessantly introducing new products; putting human beings on the telephone for customer service, in defiance of most tech company standards -- may be the Citibank of the net.

From a world-historical viewpoint, Wristonization is doing fine in general, yet not so well in the main battlefield.

Mr. Bush may be the opposite of Wriston; a Woodrow Wilson whose bon crusade will ultimately triumph, but not on his watch; a David Rockefeller whose idealism will be better implemented by some slightly more reticent successors. (In this sense, it is at least arguable that Karl Rove, Mr. Bush's equivalent of the Kaiser's Bismarck, is actually under-rated by the conventional wisdom.)

Due to tactical mistakes, Bush's democracy domino doctrine faces a weakness in the main battlefield. Iraq is a mess, and likely to remain troubled until the U.S. establishes regular voting on actual issues and in ways that have a visible impact on policy: In a word, democracy (sovereignty of the people) as opposed to condescendocracy (sovereignty of the U.S., advised by the people.)

Yet the ideas he's propounded, as political analyst Jeffrey Bell noted some months ago in the Weekly Standard, have touched off a brushfire in the Arab world, and among true democrats throughout the West. It may be, curiously, that a number of other dominoes totter or fall to democracy, from Iran to Saudi Arabia to Palestine, even as the U.S.-occupied ur-regime-change, in Baghdad, lags behind.

It is a shame that Wriston was not up and about to witness Mr. Bush's second inaugural address. No doubt he could have laid down a few gentle pieces of advice about the gap between seeing, and implementing, global change.

My own guess, however, is that Wriston would have seen Bush's approach -- or rather, did, but from a more eternal vantage point -- with satisfaction. As the far-seeing Wriston knew, and now knows more surely, vision alone is not sufficient to success in every endeavor; but a lack of vision is usually quite enough, by itself, to guarantee failure.

Gregory Fossedal is an advisor on global markets and geopolitical risk to international investors, and a research fellow at the Alexis de Tocqueville Institution. His clients may hold long and short positions in many of the investment securities and opportunities mentioned in his reports. Investors should perform their own due diligence and consult their own professional advisor before buying or selling any securities. Mr. Fossedal's opinions are entirely his own, and are not necessarily those of his clients, UPI, or AdTI. Futhermore, they are subject to change without notice.

Defense News // 1 hour ago
Afghans who helped U.S. forces to be relocated
June 24 (UPI) -- The Biden administration will relocate Afghan interpreters and others who assisted U.S. forces to other countries while they wait for special immigrant visas to enter the United States. 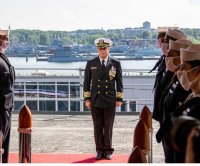 Defense News // 21 hours ago
U.S. Navy takes command of NATO's mine countermeasures group
June 23 (UPI) -- With a ceremony aboard the USS Mount Whitney, the U.S. Navy assumed command of Standing NATO Mine Countermeasures Group 1 for the first time. 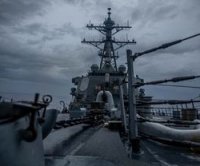