Brazil earned a big victory on the trade front as the World Trade Organization (WTO) ruled that $1.4 billion of subsidized sugar exports from the European Union (EU) were illegal in accordance to international agreements. Brazilian Agriculture Minister Roberto Rodrigues announced Wednesday that a WTO arbitrator panel had ruled that the EU's sugar-subsidy program distorted prices in the world markets.

"The victory on the panel consolidates our position to reduce protection mechanisms," Rodrigues said.

The claim had been originally raised before the WTO by Brazil, Australia, and Thailand complaining that the EU was exporting more sugar than allowed under export-subsidy agreements. The aggrieved parties had likewise stated that the subsidies enjoyed by the EU's sugar industry, including such market giants as Germany's Suedzucker AG and the United Kingdom's Tate & Lyle, were enough to cover its farmers' fixed costs.

The EU is the world's second largest sugar exporter after Brazil.

The WTO ruling marks yet another victory in the ongoing campaign by Brazilian President Luiz Inacio Lula da Silva to reduce farm subsidies in developed nations. In June, Brazil had also earned a victory in a similar trade dispute when the WTO ruled that the United States' cotton subsidies were also in breach of standing trade agreements. Nonetheless, Lula had already issued warning signs in September when he spearheaded the coordinated opposition of developing nations against farm subsidies during WTO talks in Cancun.

Agricultural subsidies in the United States, the EU, and Japan amount to a combined $180 billion each year. According to the U.K. aid agency Oxfam, the EU's subsidies alone brought global sugar prices by over 20 percent, costing Brazil some $494 million in lost export earnings during 2002.

Argentina's lower house managed to finally pass a fiscal responsibility bill to regulate spending and debt issuance. The initiative is one of the main demands set forth by the International Monetary Fund (IMF) as part of a three-year, $13.3 billion loan agreement signed in 2003.

The bill, which had already been approved in the senate, is set to become law as soon as the signature of Argentinean President Nestor Kirchner is secured.

In accordance to the bill's provisions, Argentina's provincial governments will limit debt service payments to 15 percent of their revenue. Provinces will additionally be unable to spend at faster rhythm than their respective economic growth rate.

Even though the initiative is likely to meet the approval of the IMF, repeated delays in its approval already cost Argentina the postponement of a $728 million loan payment by the fund. IMF Managing Director Rodrigo Rato confirmed Wednesday that the multilateral agency will not review Argentina's progress until after a two-week summer recess. The fund is presently evaluating Argentina's economic performance, including issues such as negotiations to restructure some $100 billion in defaulted debt as well as increasing utility rates.

Argentina has proposed its numerous creditors to swap their debt bonds for new securities in an operation that would pay about 25 cents for each dollar in defaulted debt. The offer has nonetheless been met by almost unanimous rejection, including repeated complaints by the Global Committee of Argentina Bondholders (GCAB), which represents creditors owning about a third of the defaulted debt. The GCAB holds that Argentina's economy is healthy enough to pay more to its creditors.

For the week, Argentina's Merval stock index gained 44 points to close Wednesday at 983.

Mexico's economy remains in line with official forecasts for 2004, as the Finance Ministry reported Wednesday that the country's gross domestic product grew by about 4 percent during the second quarter.

Mexico is presently enjoying a windfall of oil revenue from record-high prices in the international markets. The scenario, however, also brings mixed signals for the Mexican government as the rise in energy prices impacted in a negative manner on the economy of its main trading partner, the United States. During the second quarter, the U.S. grew at a 3 percent annual rate, its lowest in over a year.

Rising oil revenue, however, allowed the Mexican government to report a $2.2 billion deficit in June for the first time in six months, as the authorities used the money inflow to pay early summer bonuses to state workers. Nonetheless, the country's budget surplus for the first half of the year reached some $4.5 billion in accordance to figures released Wednesday by the Finance Ministry's Director of Planning Alejandro Werner.

Mexican law calls for the government to return nearly 40 percent of the extra revenue from oil sales to state-owned oil company Pemex, Latin America's largest producer. Pemex's sales grew by 26 percent during the second quarter compared to the same period in 2003.

The remaining surplus is to be divided among Mexico's different states as well as used to service debt payments. Mexico's debt reached $80.4 billion in June, some $3 billion higher than in December 2003.

According to official projections, Mexico expects to reduce its foreign debt by some $500 million as well as reach a fiscal deficit target of .3 percent of the country's GDP.

Mexico's IPC stock index lost 15 points for the week to close Wednesday at 10,075.

Chile's government remains undeterred in its attempt to pass a controversial bill to implement a royalty payment on mining companies.

"I'm confident that this project will return to the Chamber [of Deputies] next week," Chile's President Ricardo Lagos said Wednesday.

Meanwhile, Chile's macroeconomic goals remain on target as the National Statistics Institute reported Wednesday that consumer prices experienced a .2 percent in July. This way, Chile's annual inflation rate reached 1.4 percent, less than half of the Central Bank's target level of an annual 3 percent.

Chile's consistently low inflation will additionally allow the Central Bank to maintain its prime interest rate at a record low of 1.75 percent. So far the only element that could pose some concern of an upward inflationary pressure are the rising oil prices in the international markets. These, however, have been dismissed as an influential factor by Finance Minister Nicolas Eyzaguirre, who claimed that oil prices would only pose a problem for Chile if they managed to affect world economic growth.

In Venezuela, the National Elections Council (CNE) denounced serious irregularities Wednesday in the collection of signatures in support of the recall referendum on the continuity of President Hugo Chavez.

The referendum, which is set to take place August 15, calls for the opposition to secure a number of votes equal or higher than those obtained by Chavez in the presidential elections of 2000, when nearly 3.7 million Venezuelans voted for him.

According to CNE President Jorge Rodriguez, numerous names in the signature list share the same fingerprint, thus calling for renewed measures to prevent fraud in the incoming referendum.

Venezuela's economy is still recovering from the effects of a massive strike last year that drastically curtailed the output of state-owned oil company Petroleos de Venezuela. Rising oil prices have, however, provided fresh money for Chavez to reinvigorate social programs on the eve of the recall referendum.

Colombia's exports are boosting the country's economic growth reaching some $1.17 billion in May, the government statistics agency reported Wednesday. The figure marks an 11 percent increase compared to the same month in 2003.

Shipments abroad during the first five months of the year reached $5.9 billion, a 13 percent increase compared to the same period in 2003. More than 40 percent of Colombia's exports in 2004 have gone to the U.S. market, boosted in part by the preferential access the country enjoys as part of the Andean Trade Preferences and Drug Eradication Act.

Defense News // 9 hours ago
Lockheed nabs $818.2M to produce JASSMs for Air Force, allies
April 1 (UPI) -- Lockheed Martin has been awarded an $818.2 million contract for production of Joint Air-to-Surface Standoff Missiles for the U.S. Air Force and allied militaries, according to the Pentagon.

Defense News // 9 hours ago
Navy working to isolate, test sailors amid COVID-19 outbreak on USS Roosevelt
April 1 (UPI) -- The Navy and local government officials in Guam are working to isolate and test crew members on the aircraft carrier USS Theodore Roosevelt, which is currently docked in the territory amid a coronavirus outbreak, officia 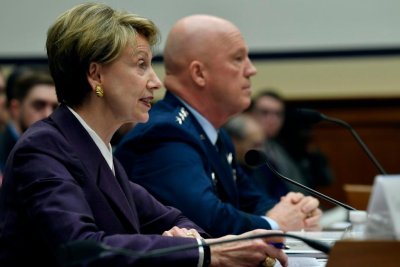