RIO DE JANEIRO, Dec. 6 (UPI) -- This country's president-elect will meet the director of the International Monetary Fund Saturday, with both likely to be on their best behavior and hoping to gain reassurances from one another on Brazil's economic direction.

Brazil's Luiz Inacio Lula da Silva -- the next leader of Latin America's biggest economy -- is looking like a regional broker when it comes to taking on multilateral lenders like the IMF and the oft-criticized trade policies of the United States.

Lula -- as the president-elect is known -- has blasted the U.S. approach to the Free Trade Area of the Americas.

He has also been quite critical of how the IMF goes about its business of bailing out South American nations, as it did in August with Brazil to the tune of $30 billion.

But the Lula who won the Oct. 27 election in a landslide victory is a softer, kinder socialist, and all bets are that he will do what he can to keep relations tidy -- though not timid -- with the powers that be up north.

Lula is facing double-digit inflation in Brazil, a currency that is slipping again and a market that is losing its patience with the lack of word on who will be the next Central Bank president.

But IMF Managing Director Horst Kohler is looking for solid relations with Lula and his Workers' Party, what with Fund's August loan -- its largest ever -- and its reputation in Latin America on the line.

Horst and the IMF need a win in Brazil after the debacle of neighboring Argentina. Lula needs some kind words and breathing room to get Brazil's economy hitting on all cylinders.

"I would expect this to be largely a cordial affair," said John Williamson, an economist with the Institute of International Economics in Washington. "I think that Kohler personally and the IMF as an institution has a lot riding on a successful outcome of Brazil's difficulties."

A Fund spokesman said no surprises were expected on Kohler's trip, which will also take him to Colombia and Chile.

"I think you should not expect demands, and you should expect reassurances," IMF spokesman Thomas Dawson told reporters in a Thursday press conference in Washington.

"This is an opportunity for (Kohler) to meet the president-elect, to offer him the support of the Fund, of the international financial community, as he works to formulate a program for the new government, for Brazil going forward into the year 2003 and beyond," Dawson continued.

Brazil's President Fernando Henrique Cardoso, in office until Jan. 1, told reporters Friday that there was little the IMF can do to bring Brazilian stability. Cardoso is set to meet later Friday with Kohler.

"Not even the strongest multilateral institutions have been able to calm down the markets amid this turbulence," Cardoso said. "You can't resolve the situation when the turbulence is so high."

Basically, Cardoso implied, only Lula and the incoming government can quelch the market's tendency to drop into hysteria with any hint of bad news from Brazil.

Lula must reaffirm austerity on the economic front and quickly name economic ministers if calm is to return, Cardoso said, although he added that he remains an optimist.

"We have President-elect Lula making even more coherent statements about economic policy than before he won the election," Cardoso said. "He is even more committed now to respecting contracts and carrying out prudent economic policies."

After meeting with Kohler Saturday, Lula will be heading to the United States Tuesday for much-anticipated talks with President George W. Bush.

Lula is likely to bring trade to the table first, as he has been pressing of late for bi-lateral relations between the United States and the Mercosur trade bloc made up of Brazil, Argentina, Uruguay and Paraguay.

The Brazilian press reported Friday that Argentine President Eduardo Duhalde asked Lula to talk with Kohler and Bush about the release of IMF aid for Argentina.

Argentina -- cut off from aid since last December, shortly after which it defaulted on its debt -- is holding out hopes for at least $15 billion in IMF aid. But talks have stalled, forcing Duhalde to reach out to neighboring presidents in his search for support.

At a summit of the Mercosur nations -- along with associate members Chile and Boliva -- on Friday in Brazil, the trade bloc extended relief to Argentina on an import tariff.

The bloc will allow Argentina to import capital goods from outside the member-area tariff free for another six months. Mercosur has a tariff on imported capital goods of 14 percent.

The Mercosur summit failed to make headway on a proposed free trade area between it and Andean Community nations bloc, which would have given Lula ammunition in his meeting with Bush.

During a tour of Argentina and Chile earlier this week, Lula talked up the need for creating European Union-like integration in South America, with a common set of economic policies to bring stability to the region and make it a more potent trade negotiator on the world stage.

After meeting with Bush, Lula will travel to Mexico on Wednesday to meet with that country's leader, President Vicente Fox. 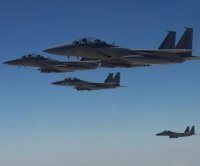 Defense News // 36 minutes ago
Saudi, Qatari, Israeli planes join USAF B-52 in Persian Gulf show of force
March 8 (UPI) -- A U.S. Air Force B-52 bomber joined escort aircraft of Israel, Qatar and Saudi Arabia in a flight over the Persian Gulf, in a show of force aimed at Iran. 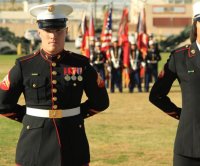 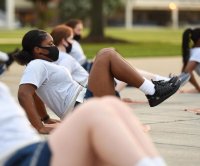