SANTIAGO, Chile, Dec. 3 (UPI) -- Trade talks between the United States and Chile are being increasingly mired by the heated rhetoric of both countries' authorities as well as the inability to reach an agreement on the ever-thorny issue of agriculture.

Tuesday was greeted with a wave of Chilean criticism against the United States' position on agriculture tariffs, after U.S. Ambassador to Chile William Brownfield stated Monday that the Chilean proposal on the issue was a "mockery."

Sen. Gabriel Valdes -- president of the Senate Foreign Affairs Committee -- condemned Tuesday the allegedly unfavorable conditions that the U.S. is offering Chile, stating that they were a "demonstration of imperial dryness." Valdes said that the American proposal on agriculture reminded him of the demands that the U.S. has imposed on other nations in the past.

Valdes's acid reply came after Brownfield stated during a meeting with the press at the U.S. Embassy that on "the Chilean side there are some who believe that the U.S. government's offer is a "mockery," and I say that that is exactly what we think about the Chilean offer."

Valdes further stated that "Chile is a country that does not spend a single peso in subsidies, whereas they have $140 billion in agricultural subsidies, that is to say, we practice free trade and the United States does not." The senator also made use of Brownfield's terms and once again called the U.S. proposal "ridiculous" as well as a "mockery," claiming that he was surprised by the U.S. Ambassador's statements, given that he knew him and found him to be "a very intelligent man."

As the 14th round of trade talks -- scheduled to be the last before the agreement's completion -- began Monday in Washington, D.C., pressure from the Chilean business community is increasing for the local authorities to secure convenient terms for the country. This was reflected in President Ricardo Lagos' words on Monday, who stated that if the agreement was not to Chile's complete satisfaction "it can not be signed."

In spite of the progress experienced in previous rounds, agriculture is proving to be a powerful roadblock for the successful completion of the trade talks, one of Chile's priority tasks over the last 12 years.

"We have progressed in the thirteen previous rounds on issues such as norms of origin, customs procedures, technical barriers, sanitary and phytosanitary norms, public acquisitions, and competition policies," Foreign Minister Soledad Alvear stated, adding that Chilean negotiators are making their "best effort" to reach an agreement in Washington. Alvear is leaving for the U.S. on Saturday in order to lead the Chilean negotiating team until the end of the present round of talks.

Chilean agriculture industry officials have particularly complained about the U.S. authorities' reluctance to remove trade barriers for their products. Chile's export industry is one of the cornerstones of its economy, where fruit and wine shipments, among others, have gained a prominent site as the country's premium products abroad, along with traditional commodities such as copper.

A particular hair-splitter for the Chilean producers has been the American offer of granting a "zero tax" status to a mere 100 kilograms of peanuts, 340 tons of cheese, and 4,000 liters of milk. The latter proposal incensed local businessmen, as Jorge Alamos -- president of the National Federation of Milk Producers -- accused the U.S. of "laughing" at the spirit of the free trade agreement with Chile. The American proposal for cheese and milk, local producer say, is equivalent to a mere 1.2 grams of Chilean cheese per U.S. citizen, whereas the allowed milk volumes amount to what just four people drink in a year.

The controversy has also led senators Carlos Ominami and Jaime Naranjo -- presidents of the Finance and Agriculture committees of the Senate, respectively -- to claim that the trade agreement with the U.S. is less important for Chile than the recently signed pact with the European Union, and that local negotiators should not settle for inferior commercial conditions.

"The agreement with the United States must be marked by the agreement we obtained from the European Union (...) Until now, the results have been worrying, very modest and poor, especially for the agriculture industry," Naranjo stated. The senator added that under "the current terms, the agreement is absolutely against the national interest given that it is affecting extremely sensitive sectors of our agriculture."

According to Naranjo, Chile's agriculture industry must not be sacrificed for the sake of a trade agreement, as was done with the country's entrance to the Southern Cone Common Market, Mercosur, where its partners' protectionist measures severely curtailed local exports to the trade bloc.

Ominami was even more stringent as he said that "the Chilean Congress will not ratify an agreement that lies below what we obtained from the European Union," and stated that negotiations should be postponed if their results did "not benefit the country."

Ominami thus made an indirect allusion to Brownfield's statements as to the inconvenience of further delays in the trade talks. The U.S. Ambassador warned Monday that should they be postponed, negotiations "are not going to be any easier, because nothing is going to change in the future" as both countries' interests would remain the same.

Although Chilean President Ricardo Lagos chose to tone down the rhetoric Tuesday by issuing a call to "remain calm" as well as expressing his confidence that the divergent positions would eventually "get closer in the end," it is believed that his moderation aims at tranquilizing public opinion before the arrival in Santiago Wednesday of U.S. Secretary of Commerce Donald L. Evans.

Evans will be accompanied by a delegation of diverse U.S. businessmen and is scheduled to meet during his two-day visit both Lagos and Economy Minister Jorge Rodriguez. 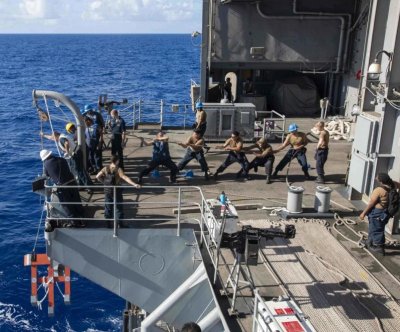