Analysis: The business of risk - I

SKOPJE, Macedonia, May 22 (UPI) -- Risk transfer is the crux of modern economies. Citizens pay taxes to ever expanding governments in return for a variety of "safety nets" and state-sponsored insurance schemes.

Taxes can, therefore, be safely described as insurance premiums paid by the citizenry. Firms extract from consumers a markup above their costs to compensate them for their business risks.

Profits can easily be cast as premiums a firm charges for the risks it assumes on behalf of its customers -- i.e., risk transfer charges. Depositors charge banks and lenders charge borrowers interest, partly to compensate for the hazards of lending, such as the default risk. Shareholders expect above normal -- risk-free -- returns on their investments in stocks, which are supposed to offset trading liquidity, issuer insolvency, and market volatility risks.

In his recent book, "When all Else Fails: Government as the Ultimate Risk Manager," David Moss, an associate professor at Harvard Business School, argues the all-pervasiveness of modern governments is an outcome of their unique ability to reallocate and manage risk.

Risk transfer is the traditional business of insurers. But governments are in direct competition not only with insurance companies but also with the capital markets. Futures, forwards and options contracts are, in effect, straightforward insurance policies.

As Holbrook Working proved in his seminal work, hedges fulfill other functions as well -- but even he admitted that speculators assume risks by buying the contracts. Many financial players emphasize the risk reducing role of derivatives. Banks, for instance, lend more -- and more easily -- against hedged merchandise.

Hedging and insurance used to be disparate activities that required specialized skills. Derivatives do not provide perfect insurance due to non-eliminable residual risks -- e.g., the "basis risk" in futures contracts or the definition of a default in a credit derivative. But as banks and insurance companies merged into what is termed, in French, "bancassurance" or in German, "Allfinanz," so did their hedging and insurance operations.

In his paper, "Risk Transfer Between Banks, Insurance Companies, and Capital Markets," David Rule of the Bank of England flatly stated: "At least as important for the efficiency and robustness of the international financial system are linkages through the growing markets for risk transfer. Banks are shedding risks to insurance companies, amongst others; and life insurance companies are using capital markets and banks to hedge some of the significant market risks arising from their portfolios of retail savings products ... These interactions (are) effected primarily through securitizations and derivatives. In principle, firms can use risk transfer markets to disperse risks, making them less vulnerable to particular regional, sectoral, or market shocks. Greater inter-dependence, however, raises challenges for market participants and the authorities: in tracking the distribution of risks in the economy, managing associated counterparty exposures, and ensuring that regulatory, accounting, and tax differences do not distort behavior in undesirable ways."

If the powers of government are indeed commensurate with the scope of its risk transfer and reallocation services, why should it encourage its competitors? The greater the variety of insurance a state offers, the more it can tax and the more perks it can lavish on its bureaucrats. Why would it forgo such benefits? Isn't it more rational to expect it to stifle the derivatives markets and to restrict the role and the product line of insurance companies?

This would be true only if we assume that the private sector is both able and willing to insure all risks -- and thus to substitute fully for the state.

Yet, this is patently untrue. Insurance companies cover mostly "pure risks" -- loss yielding situations and events. The financial markets cover mostly "speculative risks" -- transactions that can yield either losses or profits. Both rely on the "law of large numbers" -- that in a sufficiently large population, every event has a finite and knowable probability. None of them can or will insure tiny, exceptional populations against un-quantifiable risks. It is this market failure which gave rise to state involvement in the business of risk to start with.

Consider the Sept. 11 terrorist attacks, with their mammoth damage to property and unprecedented death toll. According to "The Economist," in the wake of the atrocity, insurance companies slashed their coverage to $50 million per airline per event. European Union governments had to step in and provide unlimited insurance for a month. The total damage, now pegged at $60 billion, constitutes one quarter of the capitalization of the entire global reinsurance market.

Congress went even further, providing coverage for 180 days and a refund of all war and terrorist liabilities above $100 million per airline. The Americans later extended the coverage until mid-May. The Europeans followed suit.

Despite this public display of commitment to the air transport industry, by January this year, no re-insurer agreed to underwrite terror and war risks. The market ground to a screeching halt. AIG was the only one to offer, last March, hesitantly to re-enter the market. Allianz followed suit in Europe, but on condition EU governments act as insurers of last resort.

Even avowed paragons of the free market, such as Warren Buffet and Kenneth Arrow, called on the federal government to step in. Some observers noted the "state guarantee funds" -- which guarantee full settlement of policyholders' claims on insolvent insurance companies in the various states. Crop failures and floods already are insured by federal programs.

Other countries, such as Britain and France, have for many years had arrangements to augment funds from insurance premiums in case of an unusual catastrophe, natural or man made. In Israel, South Africa and Spain, terrorism and war damages are indemnified by the state or insurance consortia it runs. Similar schemes are afoot in Germany.

(This is the first part of a three part analysis of the risk business. Part 2 will run Thursday, Part 3 Friday.) 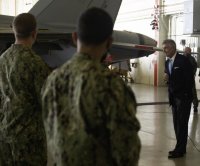 Defense News // 19 hours ago
Low flight hour causing more military crashes: report
Dec. 3 (UPI) -- Flight hours are down and training waivers are on the rise among military pilots, making military flights riskier, according to a new report from a commission convened to investigate the cases of military aviation crashe