Analysis: Hawala, the bank that never was

In the wake of the Sept. 11 terrorist attacks on the United States, attention has drawn to the age-old, secretive and globe-spanning banking system developed in Asia and known as "Hawala" (to change, in Arabic).

Its purpose is to transfer funds without formal record, thus avoiding customs duties, bribes and inconvenient regulation; its basis is a short term, discountable, negotiable promissory note called hundi. While not limited to Muslims, it has come to be identified with Islamic banking.

Simply put, Hawala is a sort of Western Union without the high-tech gear and the exorbitant transfer fees. The system provides a cheap (it costs about 1 percent of the amount transferred), efficient, and frictionless alternative to morbid and corrupt domestic financial institutions -- or too inquisitive foreign ones.

Islamic law, Sharia, regulates commerce and finance in the Fiqh Al Mua'malat, (transactions among people). Modern Islamic banks are overseen by the Sharia Supervisory Board of Islamic Banks and Institutions, known as the Sharia committee.

The "Islamic Laws according to the Fatawa of Ayatullah al Uzama Syed Ali al-Husaini Seestani" has this to say about Hawala banking:

The prophet Mohammed -- by profession, a cross border trader of goods and commodities -- encouraged the free movement of goods and the development of markets. Numerous Muslim scholars railed against hoarding and harmful speculation, such as market cornering and manipulation known as gharar.

Muslims are believed the first to use promissory notes and assignment, or transfer of debts via bills of exchange (hawala). Among modern banking instruments, only floating and, therefore, uncertain, interest payments (riba and jahala), futures contracts, and forfeiting are frowned upon.

But agile Muslim traders easily and often circumvent these religious restrictions by creating synthetic murabaha (contracts) identical to Western forward and futures contracts. Actually, the only allowed transfer or trading of debts (as distinct from the underlying commodities or goods) is under the Hawala.

Hawala consists of transferring money (usually across borders in order to avoid taxes or the need to bribe officials) without physical or electronic transfer of funds. Money changers (hawaladar) receive cash in one country, no questions asked. Correspondent hawaladars in another country dispense an identical amount (minus minimal fees and commissions) to a recipient or, less often, to a bank account.

Hundi couriers carrying an e-mail or letter convey the necessary information (the amount of money, the date it has to be paid on) between hawaladars. The sender provides the recipient with code words (or numbers, for instance the serial numbers of currency notes), a digital encrypted message or agreed signals like handshakes to use to retrieve the money. Big hawaladars use a chain of middlemen in cities around the globe.

But most hawaladars are small businesses. Their hawala activity is a sideline or moonlighting operation. Chits, verbal agreements, substitute for certain written records. In bigger operations there are human memorizers who serve as arbiters in case of dispute.

The Hawala system requires unbounded trust. Hawaladars are often members of the same family, village, clan or ethnic group. It is a system older than the West. The ancient Chinese had their own hawala called fei qian (flying money). Arab traders used it to avoid being robbed on the Silk Road.

Cheating is punished by effective excommunication and loss of honor -- the economic equivalent of a death sentence. Physical violence is more rare but not unknown.

Violence sometimes also erupts between money recipients and robbers who are after the huge quantities of physical cash sloshing about the system. But these, too, are rare events, as rare as bank robberies. One result of this effective social regulation is that commodity traders in Asia shift hundreds of millions of U.S. dollars per trade based solely on trust and the verbal commitment of their counterparts.

Hawala arrangements are used to avoid customs duties, consumption taxes and other trade-related levies. Suppliers provide importers with lower prices on their invoices and get paid the difference via Hawala.

Modern Hawala networks emerged in the 1960s and 1970s to circumvent official bans on gold imports in Southeast Asia and to facilitate the transfer of hard earned wages of expatriates to their families, their conversion at rates more favorable (often double) than the government's.

Legitimate transactions and tax evasion constitute the bulk of Hawala operations, though in the hands of drug traffickers and terrorists it becomes a means of hiding and secretly transferring funds as well.

Pakistani Hawala networks move up to $5 billion annually according to estimates by Pakistan's minister of finance, Shaukut Aziz. In 1999, Institutional Investor Magazine identified 1100 money brokers in Pakistan and transactions that ran as high as $10 million apiece.

As opposed to stereotypes, most Hawala networks are not controlled by Arabs, but by Indian and Pakistani expatriates and immigrants in the Gulf. The Hawala network in India was brutally and ruthlessly demolished by Indira Gandhi (during the emergency regime imposed in 1975), but Indian nationals still play a big part in international Hawala networks. Similar networks in Sri Lanka, the Philippines and Bangladesh have also been eradicated.

The OECD's Financial Action Task Force says that: "Hawala remains a significant method for large numbers of businesses of all sizes and individuals to repatriate funds and purchase gold. ... It is favored because it usually costs less than moving funds through the banking system, it operates 24 hours per day and every day of the year, it is virtually completely reliable, and there is minimal paperwork required." (The Organization for Economic Co-operation and Development published the report in February 2000 and carries its complete text at oecd.org/fatf/pdf/TY2000_en.pdf.)

Hawala networks closely feed into Islamic banks throughout the world and to commodity trading in South Asia. There are more than 200 Islamic banks in the United States and thousands in Europe, North and South Africa, Saudi Arabia, the Gulf states (especially in the free zone of Dubai and in Bahrain), Pakistan, Malaysia, Indonesia and other South East Asian countries. By the end of 1998, the overt (read: tip of the iceberg) liabilities of these financial institutions amounted to $148 billion. They dabbled in equipment leasing, real estate leasing and development, corporate equity, and trade/structured trade and commodities financing (usually in consortia called mudaraba).

While previously confined to the Arab peninsula and to South and East Asia, this mode of traditional banking became truly international in the 1970s, following the unprecedented flow of wealth to many Muslim nations due to the oil shocks and the emergence of the Asian tigers.

Islamic banks joined forces with corporations, multinationals, and banks in the West to finance oil exploration and drilling, mining, and agribusiness. Many leading law firms in the West (such as Norton Rose, Freshfields, Clyde and Co. and Clifford Chance) have what they call Islamic finance teams that are familiar with Islam-compatible commercial contracts.

Recent anti-terrorist legislation in the United States and Britain allows government agencies regularly to supervise and inspect businesses that are suspected of being a front for the Hawala banking system. Such laws also make it a crime to smuggle more than $10,000 in cash across U.S. borders and empowers the Treasury secretary (and its Financial Crimes Enforcement Network) to tighten record-keeping and reporting rules for banks and financial institutions based in the United States. A new interagency Foreign Terrorist Asset Tracking Center was set up. A 1993 moribund proposed law requiring U.S.-based Halawadar to register and to report suspicious transactions may be revived.

These relatively radical measures reflect the belief that the al Qaida network of Osama bin Laden uses the Hawala system to raise and move funds across national borders. For example, a hawaladar in Pakistan, Dihab Shill, was identified as the financier in the attacks on the American embassies in Kenya and Tanzania in 1998.

But the United States is not the only country to face terrorism financed by Hawala networks.

A few months ago, the Delhi police, the Indian government's Enforcement Directorate and military Intelligence arrested six Jammu Kashmir Islamic Front terrorists. The arrests led to the exposure of an enormous web of Hawala institutions in Delhi, aided and abetted, some say, by the Inter Services Intelligence, Pakistan's security services. The Hawala network was used to funnel money to terrorist groups in the disputed Kashmir Valley.

Luckily for terrorist and drug-money seekers, the common perception that Hawala financing is paperless is wrong. Written letters are still the favorite mode of communication among small and medium Hawaladars, who also invariably resort to extremely detailed single entry bookkeeping. And electronic transfer of information regarding the funds often leaves digital (though heavily encrypted) trails.

Couriers and contract memorizers, gold dealers, commodity merchants, transporters and moneylenders can also be apprehended and interrogated. And the sudden appearance and disappearance of funds in bank accounts still has to be explained.

Moreover, the sheer scale of the amounts involved entails the collaboration of off-shore banks and more established financial institutions in the West. Such flows of funds affect the local money markets in Asia and are instantaneously reflected in interest rates charged to frequent borrowers, such as wholesalers. Spending and consumption patterns change discernibly after such influxes. Most of the money ends up in prime world banks behind flimsy business facades. Hackers in Germany claimed (without providing proof) to have infiltrated Hawala-related bank accounts.

On the other hand, banks and financial institutions -- and not only in dodgy offshore havens ("black holes" in the lingo) -- may clam up and refuse to divulge information about their clients.

Banking by nature is largely a matter of fragile trust between bank and customer and of tight secrecy. Bankers are reluctant to undermine either. Banks use mainframe computers that can rarely be hacked through cyberspace and can be compromised only physically in close cooperation with insiders. The shadier the bank, the more formidable its digital defenses.

The use of numbered accounts (outlawed in Austria, for instance, only recently) and pseudonyms (still possible in Liechtenstein) complicates matters. Bin Laden's accounts are unlikely to bear his name. He has collaborators.

Hawala networks are often used to launder money or to evade taxes. Even when employed for legitimate purposes, hawaladars apply techniques borrowed from money laundering to diversify the risk involved in the transfer of large sums. Deposits are fragmented and wired to hundreds of banks the world over, a technique called starburst. Sometimes the money may boomerang, that is, end up in the account of origin.

Hence the focus on payment clearing and settlement systems. Most countries have only one such system, the repository of data regarding all banking (and most non-banking) transactions in the country. Yet even this is a partial solution. Most national systems maintain records for six to 12 months, private settlement and clearing systems for even less.

Yet the crux of the problem is not Hawala or the hawaladars. The corrupt and inept governments of Asia are to blame for not regulating their banking systems, for over-regulating everything else, for not fostering competition, for throwing public money at bad debts and at worse borrowers, for over-taxing, for robbing people of their life savings through capital controls, and for tearing at the delicate fabric of trust between customer and bank (Pakistan, for instance, froze all foreign exchange accounts two years ago). Perhaps if Asia had reasonably expedient, reasonably priced, reasonably regulated, user-friendly banks -- Osama bin Laden would have found it impossible to finance his mischief so invisibly.

Defense News // 19 hours ago
Navy officials ask for bigger share of Pentagon budget
Jan. 16 (UPI) -- Just over a month before the White House releases its defense spending budget, Navy leaders are both asking for an increase in funds and stressing that surface readiness matters more than growing the fleet.

Defense News // 1 day ago
Raytheon awarded $9M to maintain HARM weapons for Morocco, Turkey, U.S.
Jan. 15 (UPI) -- Raytheon inked a $9 million deal to maintain high-speed anti-radiation missiles, known as HARM, for the Air Force, the government of Morocco and the government of Turkey, according to the Pentagon. 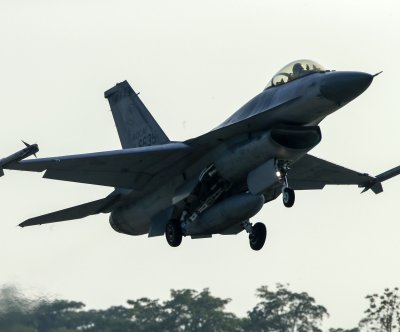