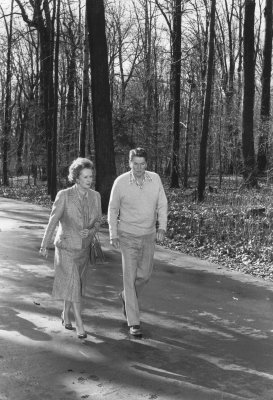 CAMP DAVID, MD: President Reagan and British Prime Minister Margaret Thatcher walk through the woods at Camp David 12/22/1984 during her stopover for talks with the President on her way back from China to England. UPI (THATCHER) mal/White House Photo.

Steve Haki: Violence has been a way of life for ages here in Lebanon; but even the Lebanese have been stunned by the intensity of the violence and terror that have shaken this small country for the past 12 months.

At the center of the violence, of course, are the Lebanese themselves: the array of Christian and Muslim communities who have fought each other for centuries. But foreigners have also suffered heavily, especially Americans, who have come to feel more and more threatened throughout the Middle East. More American Marines died in Beirut before President Reagan pulled them out after the big blowup here in the Lebanese capital last February; and American diplomats were bombed again, this time on September 20th in the U.S. Embassy annex on a hillside overlooking East Beirut.

Steven Lynn, the Deputy Chief of Mission, was here when a suicide driver blew up a truck packed with explosives outside the annex …

Deputy Chief Steve Lynn: "When we volunteered or agreed to come to Lebanon, we accepted certain risks. It's never pleasant when those risks … "

Steve Haki: Besides the two Americans killed in the Embassy blast, four others were kidnapped in Beirut during the year. One was freed; but the others -- Embassy official William Buckley, Presbyterian minister Benjamin Weir and television journalist Jeremy Levin -- remain missing as 1984 comes to a close, and there's little the American Government can do here to help them.

Elsewhere in the Middle East, two Americans were murdered and two others severely beaten in a grisly airline hijacking episode at Tehran Airport. By year's end, the Reagan Administration was still arguing over the best way to respond to similar acts of terrorism.

Prime Minister Margaret Thatcher: "The bomb went off somewhere between quarter to 3:00 and 3:00. I know that, because I looked up when I'd finished something at quarter to 3:00."

Edwin Smith: British Prime Minister Margaret Thatcher had been still awake, polishing her speech for the final day of the Conservative Party Conference, when between 15 and 20 pounds of explosives went off in Room 628, four floors above her suite at Brighton's Grand Hotel. The blast tore a gap two floors deep in the unique facade of the building and brought the interior crashing down on people like Stephen Day, who was standing in the lobby with his wife …

Stephen Day: "When it went off it was a blinding blue light, a terrific, terrific crash, the masonry absolutely pouring down. I felt as though I was going to be buried alive, you know, and I felt off-balance; I felt my ... "

Edwin Smith: Thatcher walked unhurt from the building and was whisked away in a police convoy; but it took several hours for firemen to dig Industry Secretary Norman Tebbit from the rubble, and four others died there.

Police investigators decided the IRA bombers had planted their explosives behind the bathroom panel of the sixth-floor room perhaps as much as two months earlier, intending to bring the hotel crashing down around the Prime Minister's ears. But they missed, and 12 hours later Thatcher was back in the next-door conference hall in a fighting mood …

Prime Minister Margaret Thatcher: "The fact that we all gathered here now, shocked, but composed and determined, is a sign not only that this attack has failed, but that all attempts to destroy democracy by terrorism will fail."

Edwin Smith: The IRA says it will try again and that it only has to get lucky once.