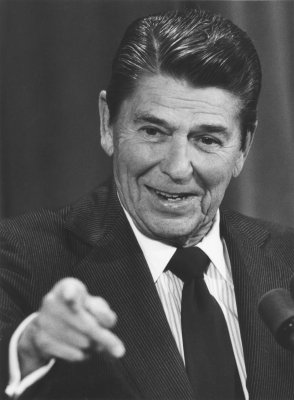 President Reagan said September 28, 1982 that even though his economic programs still has a way to go, his administration's effort has "pulled America back from the brink of disaster." (UPI Photo/Mal Langsdon/FILES)

Nick Charles: The economic problems that plagued the United States during 1981 spilled over into 1982 and were very much evident throughout most of the year, but there was room for optimism. In January, the labor department announced the total inflation rate was held to 8.9% in 1981. the smallest increase since 1977. in 1982, the rate was almost half. The interest rates were also starting to fall, but the unemployment figures continued to go up. Labor reporting in April that the jobless rate was 9%, the highest in seven years, as nearly 9.9 million people out of work.

By December the figures swelled to 10.8%, the highest in 42 years. President Reagan anxious to do something about the jobless problem, said, he was considering as an alternative to the democratic sponsored jobs program, a public works reconstruction plan. His idea to raise federal gasoline taxes by five cents. The money to be used to finance bridge and highway rebuilding program, which in turn would create jobs, but he insisted it would not violate an earlier pledge not to raise taxes.

President Reagan: “It would be a user friendly. It would be dedicated to the rebuilding of our highways and bridges. This is the problem, it must be met sooner or later.”

Nick Charles: The proposal had powerful republican backing. 1982 also saw the social security system in trouble and debate on it's future. On August 19, Congress passed what turned out to be the largest tax hike ever and this during an election year recession. Supply-siders fought the President's $98 billion tax hike proposal bitterly. Republican Ed Bethune of Arkansas said, “It would not work.”

Ed Bethune: “You can't get economic growth and balanced budgets by raising taxes. Congress won't use new tax money to reduce the deficit, it will just spend it.”

Nick Charles: The correlations of democrats and loyal republic argued back that the increase would cut the deficits. House speaker Tip O'Neill lectured young republicans about political, not economic death.

Nick Charles: But a majority of Republicans and Democrats did follow the leader and the bill passed. During the November elections, the democrats scored gains, expanding their majority by 26 seats in the house, but the standard makeup remained the same. The stock market took off like a rocket during the summer of 82 and didn't let up. Robert Cohen reports, record high volume was registered on October 7th and surpassed a month later. The Dow Jones Industrial also soared to the highest point ever.

Robert Cohen: “October 6, lower interest rates kept the summer, autumn rally bandwagon rolling and the Dow Jones Industrial soared 37 points. The next day the traders plunge the market into a frenzy. Some 147 million shares were traded, topped only by activity on November 4th. Investors voted for lower rates on November 3rd and the market posted a record gain of more than 43 points soaring to it's highest level ever, 1065.49, an advance of 277 points since the rally began in mid August. Robert Cohen, New York.”