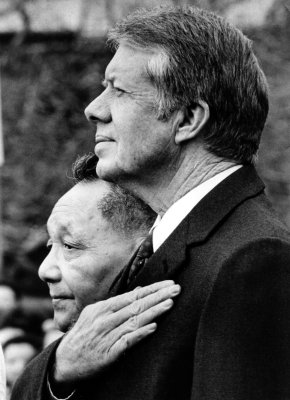 President Jimmy Carter and Chinese Vice Premier Deng Xiaoping stand at attention for the playing of the national anthems during welcoming ceremonies for Deng on the White House lawn 1/29/1979.

Jim Lounsbury: The incident at Three Mile Island made the country aware of the problems that energy sources can give birth to, but no energy event hit home more heavily than the nationwide shortage of gasoline in 1979. It was in California on May 9th where the first drastic step was taken, as an odd/even daily rationing system went into effect to combat the steadily worsening situation. It was the first gas rationing in the United States in five years.

Roger Giddens: "Guadalupe, Mexico City, Jerusalem, Cairo, Vienna, Tokyo, six months, six international datelines that made the first half of the President's year a season of high diplomatic drama. The Big 4 Sunshine Summit in the Caribbean got Mr. Carter's new tear off to a comfortable start. The palm trees and topless bathers made for a successful no-fault conference; however, Mr. Carter's tan faded quickly, to be replaced with a red face. Mexican President L?pez Portillo sternly lectured his American guest in public on the evils of U.S. imperialism. The political mileage the President had expected from officially recognizing Red China never amounted to much: Deng Xiaoping's visit to the United States was more of a novelty than an event. The political bonus was yet to come, and when it did, the President was standing on a dusty runway near Cairo."

President Jimmy Carter: "I am convinced that now we have defined all of the main ingredients of a peace treaty between Egypt and Israel which will be the cornerstone of a comprehensive peace settlement for the Middle East."

Roger Giddens: "What could have been a diplomatic disaster for Mr. Carter became a triumph, because he went to the Middle East and refused to go home empty-handed. The treaty-signing on the White House lawn had the deep resonance of handmade history. Prime Minister Menachem Begin signed and spoke for his people."

Roger Giddens: "The President set his sights on another treaty, SALT. After years of negotiations, it was signed in Vienna. Mr. Carter returned to Washington for a report to Congress."

President Jimmy Carter: "SALT II is the most detailed, far-reaching, comprehensive treaty in the history of arms control."

Roger Giddens: "But the Senate was skeptical. The treaty was soon bogged down in a long ratification fight. The President had planned to spend the summer pushing the arms-control pact; however, gasoline lines, first in California and then spreading across the country, changed all that. The Economic Summit in Tokyo became an Energy Summit. Back home, the President promised a 4th of July address on the problem, but abruptly canceled the broadcast. He stayed at Camp David for nearly two weeks, conferring with advisors. Finally, he spoke out."

President Jimmy Carter: "The erosion of our confidence in the future is threatening to destroy the social and the political fabric of America."

Roger Giddens: "A few days later, a bombshell: nearly half the members of the Cabinet were fired. Official Washington was stunned, some critics questioned Mr. Carter's sanity. Things settled down after the shakeup, the Carters cruised the Mississippi on the Delta Queen, the economy zigged and zagged toward recession, Congress squabbled over the windfall-profit's tax. The President's standing in the polls made history, by hitting the lowest point ever."

Senator Edward Kennedy: "And therefore I take the course compelled by events, and by my commitment to public life. Today, I formally announce that I am a candidate for President of the United States."

Roger Giddens: "However, as Edward Kennedy was announcing, the siege at the American Embassy in Tehran was in its fourth day. As it dragged on, Mr. Carter's low-key response seemed to refurbish his image as a leader. Still, he described the Iran crisis as the worst period of his Presidency. Roger Giddens at the White House."