Skylab Comes Down to Earth 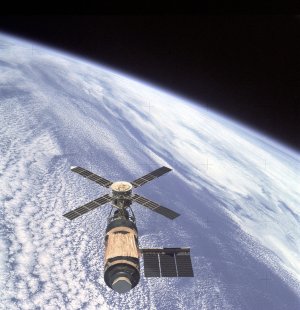 An overhead view of the Skylab Orbital Workshop in Earth orbit is pictured on February 8, 1974. NASA celebrates the 50th anniversary of the Space Age marked by the October 4, 1957 launch of Sputnik, the world's first artificial satellite, made by the Soviet Union. (UPI Photo/NASA/FILES)

Jim Lounsbury: Junk in space: that's what you might call all the nonworking, useless space equipment that's circling the earth every day. No longer operational and having outlived its usefulness, these pieces of space debris will eventually burn up in space...except those few large objects which can resist destruction as they make their way back to earth. So it is with Skylab, the space junk that fell in Australia. Dennis Galeno reports.

Dennis Galeno: "It was high drama, but Skylab's problem was that it kept getting lower. As the world watched this largest of all manmade objects fall out of orbit and come closer, even its creators did not know for sure where the roulette wheel would stop … "

Unknown Speaker: "Approximately 24 hours before predicted Skylab reentry. The latest prediction from the North American Air Defense Command is that reentry will take place between 7:02 a.m. … "

Dennis Galeno: "After nearly 35,000 orbits, there finally arrived the very last one. NASA's Dick Smith hoped the target would be water"

Dennis Galeno: "Instead, Skylab hit Australia, but not any Australians."

Unknown Speaker: "We're glad it's down. We would like to have seen it never sighted obviously over Australia, because..."

Dennis Galeno: "One Down Under bystander, 17-year-old Stanley Thornton, Jr. was first to find Skylab pieces, and so he won thousands of dollars in cash and furniture from American companies. This is Dennis Galeno reporting."

Jim Lounsbury: 1979, the end of a year, the end of a decade. If its turbulence is a harbinger of what to expect in the '80s, then the upcoming decade may be the most incredible of the 20th Century.

You've been listening to Recap '79, a production of the UPI Audio Network. This is Jim Lounsbury.