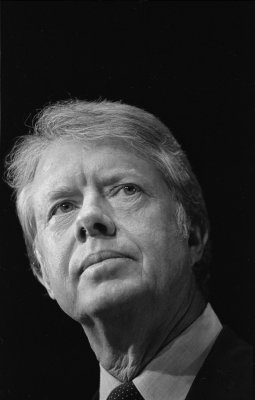 Portrait of Jimmy Carter taken on November 1, 1976 in Sacremento, California, during a cmapign stop. (UPI Photo/Files)

Jim Lounsbury: What you are about to hear is a story of one of the most incredible years of the century: The year 1979.

As the year came to an end, the top story of the year continued to grab the headlines in newspapers and the top spot on radio and television newscasts. The story, of course, is the one of American hostages being held captive in the United States Embassy in Tehran, Iran.

While that was the major story for the last two months of the year, other events in 1979 turned our heads and shocked our senses, such as the accident at the nuclear plant at Three Mile Island in Pennsylvania. It was a bizarre event that kept the world in suspense for days.

Major events such as the economy, inflation, energy, the Middle East peace and President Carter’s days in the White House during the year will be reviewed for you in Recap 1979.

Stay tuned, right here. This program will continue after this message.