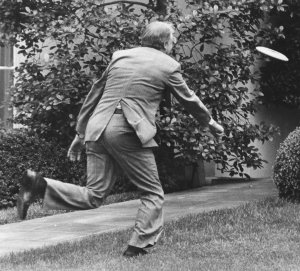 President Jimmy Carter tosses a frisbee while on his way from his White House office to drop by at a staff picnic on the South grounds on June 8, 1978. (UPI Photo/Frank Cancellare/Files)

Announcer: 1978 was James Earl Carter, Jr.'s second full year in the White House. For a look at how Jimmy Carter fared, here is Correspondent Roger Gittins...

Roger Gittins: "For a while it seemed like President Carter couldn't do anything right. His energy program, the cornerstone of the Administration's domestic policy, was in shambles after a year of Congressional squabbling. Leading Democrats were openly critical and in some cases downright scornful of the White House performance. Frank Moore, Mr. Carter's top lobbyist, was banished from the office of the Speaker of the House because Tip O'Neill was outraged that one of his cronies was fired at the General Services Administration after Moore had reportedly assured him it would never happen.

"Other allies file that Mr. Carter was unable or unwilling to keep his end of vote trades. HEW Secretary Califano became public enemy number one in tobacco country by launching a vigorous Federal anti-smoking campaign.

"Little things stung, too. President's Chief of Staff Hamilton Jordan got himself embarrassing publicity by allegedly spitting a drink on the blouse of a young woman at a Georgetown singles bar. Bert Lance wouldn't go away. And the Republican Federal prosecutor for Philadelphia refused to be fired and accused the President of tampering with one of his investigations.

"Meanwhile, Mr. Carter's popularity in the public opinion polls dropped into the lower 30s from a high of over 70 percentage points. White House morale began to sink, as well. One prominent official conceded to friends his boss would be a one-term President if things didn't improve.

"For a time, they didn't improve. Mr. Carter's drug-abuse advisor was caught writing a phony prescription for powerful drugs. Peter Bourne quit quickly when the process implied that drug abuse, primarily pot smoking, was not unusual among the President's staff. The hubbub over the Bourne affair, however, obscured the first signs of the turning tide. Mr. Carter's position on Capitol Hill was improving. He won a showdown over the question of giving arms to Saudi Arabia. The energy bill was picking up momentum, though without most of the Administration's original tax and conservation provisions.

"The biggest victory came with the Panama Canal Treaties..."

President Jimmy Carter: "General Torrijos and the Panamanian people have been patient and forbearing during the negotiations and during the Senate debate. They've earned the confidence and respect of the American people. Their actions during the last few months is proof of their willingness to form a partnership with us, to join in cooperation rather than confrontation.'"

Roger Gittins: "The President defied the odds by winning ratification for both pacts"

President Jimmy Carter: "'All Americans should share the pride, I feel, in the accomplishments which we register today.'"

Roger Gittins: "He succeeded in lifting the arms embargo against Turkey, in spite of powerful Congressional opposition. Mr. Carter vetoed the defense authorization bill because it included money for Navy super-carriers and made it stick.

"The Camp David Summit made the comeback official. Mr. Carter gambled that a face-to-face meeting between the Egyptian and Israeli leaders refereed by the President of the United States would break the long deadlock.

"This is Roger Gittins reporting."

Previous Story
Events of 1978
Next Story
The Camp David Summit