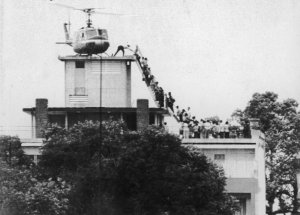 A member of the CIA helps evacuees up a ladder onto an Air America helicopter on the roof of 18 Gia Long Street April 29, 1975 shortly before Saigon fell to advancing North Vietnamese troops. Photo by Hugh Van Es/UPI

Ed Karrens: Right from the start of 1975, the war in Vietnam had not been going well for the South Vietnamese. By the middle of March, four major towns were lost to the North Vietnamese forces. South Vietnamese citizens and soldiers fled the northern part of their country heading for the temporary shelter and safety of Saigon and other coastal towns.

Soon the ancient culture city of Hué was abandoned, and then Danang, the second largest city in the south, became the scene of panic and chaos during the air evacuation, chaos created by the people who seemed to sense the end was near. South Vietnamese troops threw away their weapons and beat off civilians, including women and children, were trying to enter the planes that would soon fly them out of danger.

Paul Vogel: "They were knocking each other over, swinging at each other, and as they arrived here that they began plucking at anything they could hold on to. There were people, mostly families where the women and children did not get aboard the aircrafts, who were lying in front of the fields of the airplane as it began taxiing. It's the most frightening experience I've ever had. It's the worst story I've ever had to cover, every viewpoint: humanity, men being cruel to other men, the fact of human beings turning into pure animals. I've seen mob scenes before; this was outright panic."

Ed Karrens: April 29th, the enemy is moving closer to Saigon. President Ford orders total evacuation of Americans from South Vietnam. And the very next day, the Vietcong accepted the unconditional surrender of South Vietnam.

UPI's Allen Dawson, one of a handful of American journalists left in Saigon, watched the North Vietnamese and Vietcong troops enter the city in a victory parade …

Allen Dawson: "Here on the street right beside me, the main street of Saigon, South Vietnamese soldiers have taken off their boats, thrown down their arms and uniforms. Unattended weapons just lying here, nobody paying any attention to it, to all this military equipment. Soldiers have just dropped their arms and faded into the population, soldiers no more. The foot soldiers now are out in the middle of the road, carrying their AK-47 rifles, their B40 rocket grenades, the RPGs, and there's one with a guitar slung over his shoulder where others have weapons."

Allen Dawson: "That was a solider, Vietcong soldier who came and asked me was I a newsman, and I tried out my four words of Vietnamese that I know.

"The tanks, the troops now turning around here in the streets. Hundreds of people out to watch this victory march by the new forces that now control South Vietnam."

Ed Karrens: Within three months, the Indo-China conflict which spread war over 20 years was over. Cambodia, Vietnam and Laos all became Communist- and pro-Communist- controlled nations.

But the end of the Vietnam War did not end the controversy at home. Some 150,000 refugees were slated to be flown from Vietnam, and the opposition to some of them settling in the United States grew. Citizens protested their arrival …

Unknown Speaker: "We got enough employees in this country; we got enough parasites. We need jobs!"

President Gerald Ford: "I am primarily very upset, because the United States has had a long tradition of opening its doors to immigrants from all countries. We're a country built by immigrants from all areas of the world, and we've always been a humanitarian nation. And when I read or heard some of the comments made a few days ago, I was disappointed and very upset."

Ed Karrens: Finally, legislation approving over $400 million in funds for the refugees was passed, and the displaced persons, like those from other days and other lands, made their way into American society.