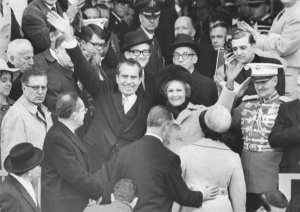 Richard M. Nixon and his wife Pat, after becoming the 37th President and First Lady of the United States of America, leave the platform for the swearing-in ceremony at the Capitol in Washington on january 20, 1969, and wave triumphantly to the crowds. In front of them are Vice President and Mrs. Spirow T. Agnew. (UPI Photo/Files)

Announcer: 1970, the beginning of a new decade; a new decade yet too young to pinpoint its direction or to give it a name. The '70s, where are they going, what will they bring? Perhaps a look at the past year can give us a hint of things to come, a look at those news events; some that are gone and forgotten, some that will always be remembered, but events that had some affect on you in 1970.

Unknown Speaker: "I think it is as critical, perhaps probably the most critical situation we face so far in the man’s spaceflight program in flight."

Unknown Speaker: "Suddenly they turned around, got on their knees as if they were ordered to, they did it altogether, aim. And personally, I was standing there saying, they are not going to shoot, they can't do that. If they are going to shoot, it’s going to be blank."

Unknown Speaker: "I want to develop my potential as a person, just as well as a woman. I want the freedom not to have a husband, where women help support their children, and men help rear them."

Announcer: United Press International presents 1970 In Review, a documentary with the words and sounds of the year which marked the beginning of a new decade. 1970 In Review will continue after this message.