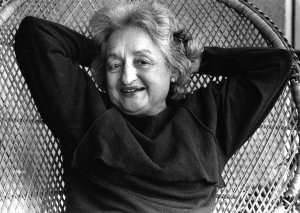 Feminist Betty Friedan, who celebrates her 65th birthday on February 4, 1986 in Los Angeles, says the women’s movement is treading waters and worries that baby boomers will take the gains made early feminists for granted. Friedan also says that at 65 her life is more fun than it ever was. (UPI Photo/Debra Myrent/Files)

Announcer: 1970 marked the 50th anniversary of women's right to vote in the United States. It was fitting then that in 1970 a rebirth of that struggle came about. Betty Friedan, as a principal organizer of women in their fight for equal rights, 1970 style. The highlight of the year for women came about on August 26th, the day set aside by various female organizations to demonstrate nationwide their demands.

Betty Friedan: "All kinds of women's groups all over the country will be using this week on August 26th particularly, to point out those areas in women's life which are still not addressed. For example, a question of equality before the law; we are interested in the equal rights amendment. The question of child care centers which are totally inadequate in the society, and which women require, if they are going to assume their rightful position in terms of helping in decisions of the society. The question of a women's right to control her own reproductive processes, that is, laws prohibiting abortion in the state or putting them into criminal statutes; I think that would be a statute that we would addressing ourselves to.

"So I think individual women will react differently; some will not cook that day, some will engage in dialog with their husband, some will be out at the rallies and demonstrations that will be taking place all over the country. Others will be writing things that will help them to define where they want to go. Some will be pressuring their Senators and their Congressmen to pass legislations that affect women. I don't think you can come up with any one point, women will be doing their own thing in their own way."

Announcer: Some of the demonstrations were reminiscent of a sorority initiation, but all in all the women made their point.

Unknown Speaker: "In this holy ground, I consecrate this plaque to the memory of Susan B. Anthony. In the name of the mother, and the daughter, and the holy granddaughter, ah women, ah women, we will now sing of her."

Announcer: When you talk about women in 1970, there's one topic you can't dismiss, the battle between the Midi and the Maxi. Women around the country protested the dictate of the fashion designers and promoters, the so-called fashion influencers. The women said the Maxi and the Midi were being pressured on them. Many formed anti-Midi organizations. They refused to buy the calf and ankle length styles, and even refused to shop in stores that sold them.

The last word is that the women of the United States have won the battle, at least one famous designer has dropped his Midi-Maxi line and is back to the above knee hemline. The victory was praised by men the world around. 1970 in Review will continue right after this message.

Women in 1970 didn't stop with the Midi victory. At a Senate hearing on birth control pills, they broke up one of the sessions.

Unknown Speaker: "Women are not going to sit quietly at any longer, you are murdering us, for your profit and convenience."

Unknown Speaker: "The girls and women of the Women's Liberation Front finally couldn't take it any more and so they broke up the Senate's pill hearings. In miniskirts, maxi coats, frumpy housewife outfits, they had filled up the small business subcommittee hearing room. Their first action was to match the dull press releases from the prominent doctors, with a snappy release of their own, carrying a scotch taped real pill."

Unknown Speaker: "Did you all take a pill we handed out this morning, everyone has a pill here."

Unknown Speaker: "Hearing Chairman Gaylord Nelson instructed police to clear everybody; women, reporters, and all out of the room. He left. The only Republican on hand, Robert Dole of Kansas City would not mind letting the militants testify, and then he ducked out. And after some pushing and shoving with embarrassed policemen, the women left too."

Announcer: The birth control pill came under much criticism during the hearings, viewpoints differed even among experts. Here Dr. Michael Newton, President of the College of Obstetricians and Gynecologists gives his view.

Dr. Michael Newton: "The evidence is not yet clear that these still do in fact cause cancer or related to it. The FDA Advisory Committee made comments about this, that if there wasn't enough evidence to indicate whether or not these pills were related to the development of cancer, and I think that's still thin; you have to be cautious about them, but I don't think there is clear evidence, either one way or the other, that they do or don't cause cancer."

Announcer: Another expert was Dr. Roy Hertz of the Population Council.

Dr. Roy Hertz: "Application of these medications in their present state of knowledge constitutes a highly experimental undertaking, that the individual called upon to take these materials, particularly for prolong periods of time, should be regarded as in effect a volunteer for an experimental undertaking. I think she should be so informed. I think that the various aspects of our knowledge and ignorance in these matters should be made clear to her, and as explicit languages can be done, and that on that basis she should be expected to either accept or not accept this form of medication."

Announcer: The upshot of the hearings was the decision reached by the Secretary of Health, Education, and Welfare at the time, Robert Finch. He announced the federal government had accepted a compromise warning statement which would accompany all sales of birth control pills.

Robert Finch: "Delicate balance we had here was to create a long list of horribles, which had shown up in a very minute portion of the population. When you weigh the risk benefit ratio, there is just no question, but what the overwhelming number of women using the pill do not affect it, but we are now putting them on notice. This is an unprecedented step. A lot of people opposed it, to put this kind of warning in every package that goes out."

Previous Story
Ecology
Next Story
Eclipse and the Beatles Split