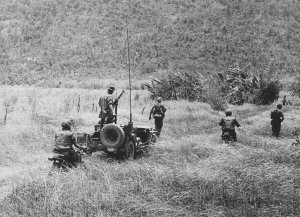 RECON RIDERS: The Recon riders are off the main road into the primitive brush hunting Viet Cong, 5/3/1969. (UPI Photo)

Announcer: It was through the silent majority that President Nixon appealed for support when he gave a major speech on the administration’s Vietnam policy on November the 3rd.

President Richard M. Nixon: “The effect of all the public, private, and secret negotiations which have been undertaken since the bombing halt a year ago, and since this Administration came into office on January 20th, can be summed up in one sentence: No progress whatever has been made, except agreement on the shape of the bargaining table.

"So tonight, to you, the great silent majority of my fellow Americans, I ask for your support. The more support I can have from the American people, the sooner that pledge can be redeemed. For the more divided we are at home, the less likely the enemy is to negotiate at Paris.”

Announcer: On the surface, the war in 1969 did not change. Expanded peace talks began in January but got nowhere. Both sides offered peace plans, each side rejected the other. Then in June, the President met on Midway Island in the Pacific with South Vietnamese President Thieu. Out of the meeting came this announcement.

President Richard M. Nixon: “President Thieu informed me that the progress of South Vietnamese forces had been so successful that he could now recommend that the United States begin to replace U.S. combat forces with Vietnamese forces. This same assessment was made by General Abrams when he reported to me last night and this morning.

As a consequence of the recommendation by the President and the assessments of our own commander in the fields, I have decided to order the immediate redeployment from Vietnam of the division equivalent of approximately 25,000 men.”

Announcer: Throughout the year the war continued, and a few incidents did not make it an easier war for some to accept. First, there was a partial mutiny by a number of men in one company. They refused to go back into a battle they had been fighting for five days. However the mutiny was short lived, and the men soon were fighting again.

Eight green berets were charged with murdering a Vietnamese they suspected of being an enemy agent. Public settlement become greaten, and Secretary of the Army, Stanley Resor, eventually ordered the case dismissed.

Stanley Resor: “I have been advised today that the Central Intelligence Agency, though not directly involved in the alleged incident, has determined that in the interest of national security it will not make available any of its personnel as witnesses in connection with the pending trials in Vietnam of army personnel assigned to the 5th Special Forces Group. It is my judgment that under these circumstances, the defendants cannot receive a fair trial. Accordingly, I have directed today that all charges be dismissed immediately.”

Announcer: Everyone knows about the horrors of war, but it’s always the other guy who commits the atrocious act, the bad guy. So when a story about the massacre of Vietnamese villagers by American soldiers was made public, many Americans were appalled.

An army platoon is said to have raided a Vietnamese village and then allegedly following the orders of Lieutenant William Kelly shot down every villager; men, women and children. The Pentagon is investigating the matter, and Lieutenant Kelly charged with murder will go on trial in early 1970.

The death of Ho Chi Minh, the ineffectiveness of the peace talks, and the withdrawal of American troops seemed to have little effect on the war.

While President Nixon withstood his most pressing problem, as it was for the man he succeeded.

Unknown Speaker: “Now it’s time to leave. I hope it maybe said 100 years from now that by working together, we helped to make our country more just. I believe that at least it will be said that we tried.”

Police search for 2 suspects after 9 injured in Cincinnati shooting

CBP finds boat with more than 300 migrants near Florida Keys