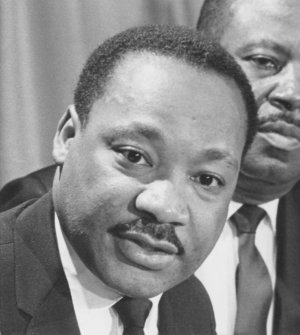 Announcer: One assassination is one too many for any country. But for America in 1968 there were two. On April the 5, 1968, another leader of American people was shot*.

Announcer: The story of the assassination of Dr. Martin Luther King Jr. is next on United Press International’s 1968 In Review.

Martin Luther King: “And then I got to Memphis. And some began to say the threats, or talk about the threats that were out. What would happen to me from some of our sick white brothers? Well, I don't know what will happen now. We've got some difficult days ahead. But it really doesn't matter with me now. Because I've been to the mountaintop. And I don't mind.”

Announcer: Some say that Dr. Martin Luther King had a premonition about his death, certainly he thought about it, and on the night of April the 4th, 1968, it came.

Unknown Speaker: “I was staying down on the ground floor, looking up at him as he came out of his room, and we were talking, as I was talking to Brown, and he was upstairs. And all at once a sound, which I now know to be a shot, it sounded like a firecracker, and I turned around behind me and I turned around again, I saw him laying down, and then I ran out to the street to see whether or not there was a car out there. “

Announcer: You are listening to United Press International’s 1968 In Review. This program will continue right after this message.

The assassination of Dr. Martin Luther King Jr. struck the nation with intense concern. Political leaders such as Senator Howard Baker of Tennessee called for restraint.

Senator Howard Baker: “I very much hope that the rumors that there have been extensive gun purchases are exaggerated, but if they are true, I also very much hope that this would be an example of futility of violence, whether by white or by black. And that we do not have a repetition of Detroit, of Washington (ph), of any other unpleasant incident on the social evolutionary scale of American development, and that this terrible sacrifice by Dr. King maybe the touchstone by which this nation grabs hold of its wits and realizes that we have a great job ahead of us, but that it’s not an impossible task and that we can accomplish it in brotherhood.”

Announcer: Most black leaders called for nonviolent action in the wake of King’s death, James Farmer was one.

James Farmer: “Dr. King would be greatly distressed to find that his blood had triggered off bloodshed and disorder, because that is -- when it is accounted to his entire life. I think instead the nation should be quiet; black and white, and we should be in a prayerful mood, which would be in keeping with his life. We should make that kind of dedication and commitment to the goals which his life served to solving the domestic problems. That’s the memorial, that’s the kind of memorial we should build for him. It’s just not appropriate for there to be violent retaliations, and that kind of demonstration in the wake of the murder of this pacifist and man of peace.”

Announcer: But Stokley Carmichael was angry.

Announcer: Maybe it was frustration, maybe hate, perhaps vengeance, but whatever the cause, black persons in many cities; in Chicago, in Boston, in Detroit, and Washington, took their fury to the streets. Reason was gone and looting, arson, and terror took over.

Bill Greenwood: “Federal troops in combat dress have surrounded the White House and the Capitol building as racial violence continues here. As bands of Negroes roam the streets, a machine gun post was set up on Capitol Hill. Despite an emergency curfew, Negroes continue to loot at will in the downtown section; some of the trouble just three blocks from the White House.

"Black smoke can be seen billowing into the air in many parts of North West Washington, the result of dozens of arson cases.

"Police have occasionally fired teargas in attempts to hold bands of looters. In several instances, officers held looters at bay with shotguns. This is Bill Greenwood in Washington.”

Announcer: Before the smoke had cleared and the sirens had stopped, the funeral of civil rights leader Martin Luther King was held. His plain oak coffin was carried through the streets of Atlanta, Georgia on a wooden cart, drawn by two mules. At the church services, a song so closely associated with the Civil Rights Movement and Martin Luther King sprang from the crowd. They sang for a man they revered.

*Editor's note/fact correction: although the radio announcer states that Dr. Martin Luther King Jr. was shot April 5, 1968, in this 1968 radio broadcast, he was in fact shot April 4, 1968.