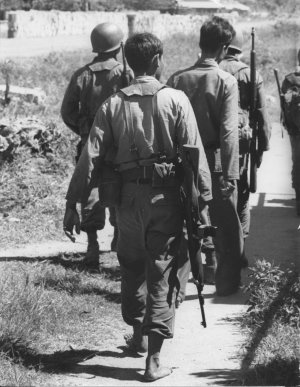 Suoi cat, South Vietnam: A South Korean soldier --minus his boots and helmet -- marches in with his comrades 1/20/1966 during a sweep of this area about 30 miles southeast of Saigon recently. The column was chasing a group of Viet Cong who had overrun the area the day before. (UPI photo)

Announcer: Vietnam was unknown to most Americans only a few years ago. In 1966, Vietnam was the year’s biggest story. There where other news were the places and events, civil rights, Congress, business and labor, but Vietnam, a war, young men dyeing and questioning world opinion dominated the news.

As the year began, the United States was in the midst of pause in its bombing on North Vietnam. Hoping to perceive some sign from the communists that they wish to deescalate or even end the war. But the Secretary of State Dean Rusk said...

Dean Rusk: "I found no one who had any indication or belief that the authority then only have decided to give up their aggressive ambitions or to come to a conference table to bring about a peaceful settlement. It seems to me therefore that our present course is clear. To support our own men in uniform and their allies and to proceed as rapidly as possible with a political, economic and social measures in Vietnam which are required even in the midst of war."

Duff Thomas: And America’s course was clear. As the air war over the North intensified, American pilots ran into increasing trouble. More planes were down by anti-aircraft fire and ground-to-air missiles. On the ground, marines and air cavalrymen pushed through thick jungles and wet rice paddies and deep rivers to keep the communists off guard and on the defensive. An expected full scale offensive by the communists was stopped.

Correspondent Bill Rowley with a patrol gave a vivid account of the GI’s life in Vietnam.

Bill Rowley: "GIs holding the rifles above their heads, under rolling above this -- one just fell."

Duff Thomas: American troops strengthened in Vietnam advanced to over 360,000 men with more promised in 1967. More than 5500 Americans were killed. President Johnson went to the scene of battle and on the sands of Cam Ranh Bay, he told the GIs --

Lyndon B. Johnson: "Make no mistake about it, the American people that you represent are proud of you."

Duff Thomas: Not everyone supported US presence in Vietnam. Congress had its objectors and they tightened when the President asked for more money to pursue the war. Arkansas Democrat J. William Fulbright coined the phrase "Credibility Gap" saying he couldn't get a straight answer from the administration about the war, republicans picked it up. House Minority Leader Gerald Ford restated congressional disapproval.

Gerald Ford: "There are those in this administration who appear to believe that half a truth is better than none, we disagree. Where the American people at home are concerned we must have the whole truth."

Duff Thomas: But the money came, there seemed a little else to do. Others did not like the United States in Vietnam. Some citizens of South Vietnam, Buddhists primarily went for the throat of Nguyen Cao Ky’s government and hindered South Vietnamese efforts on the battlefield.

Unknown Speaker: "We don’t like the war in Vietnam. Now I will ask the American, go home and bring the -- come back to the America."

Duff Thomas: Pre-elections were promised and held despite the worst Viet Cong terrorist could hand out. A constitute assembly was chosen to pave the way for further pre-elections with 70% of the South Vietnamese population voting. Government officials called it a sharp defeat for the communists who tried to upset the elections.

As the sounds of war continued with outlet up to the top was about peace. Everyone said they wanted it including the communists. Every side had terms, none of them agreeable and the war went on.

When the year began, the United States was in the midst of a 37 day pause in its bombing of North Vietnam. Diplomats throughout the world told US officials that the pause might lead to peace talks. US Ambassadors Herman & Goldberg carried the quest for peace all over the world. President Johnson was forced to call off the pause because --

Lyndon B. Johnson: "Throughout these 37 days even at moments of truth there has been continued violence against the people of South Vietnam, against their government, against their soldiers and against our own American forces."

Duff Thomas: Pope Paul VI, Britain’s Prime Minister Harold Wilson and Canada’s Prime Minister Lester Pearson, all tried for peace in 1966. UN Secretary General U Thant announced that he would not take a new five-year term when his personal peace offensives ran into opposition in the Security Council.

U Thant: "I think I should decide one way or the other, perhaps before June so that the Security Council will be in a position to nominate someone to succeed me if I decide not to offer myself for the second term to recommend to the General Assembly. Of course, if the Security Council were in a position to find someone to be recommended to the General Assembly to succeed me, in the course of the next few months, I believe it will facilitate by decision."

Duff Thomas: He was prevailed upon to stay however and he announced he would continue his efforts to achieve peace in Vietnam. However, all efforts produced the same negative response from Hanoi and Peking. Senate Minority Leader Everett Dirksen best expressed everyone’s feelings when he sounded a note of disappointment.

Everett Dirksen: "This country with all its resource and management, with its way out and its man power has been able to bring this to an honorable conclusion more quickly than they have."

Duff Thomas: In this country, many expressed their dislike for war, the most aggressive with the students who picketed, burned draft cards and adopted many of the tactics and sloganizing ways of another American revolt Civil Rights.

Robert Kennedy: "I might disagree with some of the demonstrations that are taking place and in fact I do. I think that the fact that so many young people, so many of the rest of our folks have taken such an active interest in this matter, I think it’s healthy for the country."

Duff Thomas: Most of the men fighting in Vietnam didn’t request it and a rumble of roles over the draft system. Students opposed schools providing class rankings to draft boards as a method of handing out deferments. Civil Rights leaders turned their attention to this problem as well as the new lowered induction standards. Harlem Congressman Adam Clayton Powell expressed his objection.

Adam Clayton Powell: "Seems to me America should be confident in the knowledge that a higher percentage of black students is already dying and what is ingloriously being referred to in black community that the white man’s rule against brown people."

Duff Thomas: Some already in uniform objected to the war, several refused to go to Vietnam. The most outspoken critic of the war was again Senator Wayne Morse. The Oregon democrat’s raspy voice echoed through the empty senate chamber.

Wayne Morse: "I love my President, but I love my country more. And I want to say that if we follow the President’s war making course of action, the American people will end up involved in a massive war against both China and Russia and out of that will come no victors."