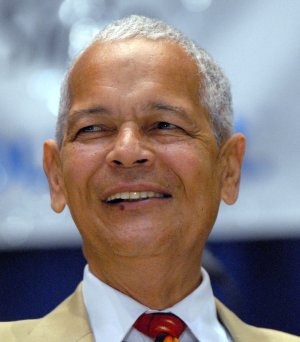 Duff Thomas: 1966 did not provide a focal point for the Civil Rights Movement. The closest occasion for pulling together interest came when James Meredith, the first Negro to attend the University of Mississippi was shot while on a march through that State. Before marching, Meredith explained the conditions which he felt existed there and the purpose of his walk.

James Meredith: "The Negro from Mississippi has a lot but that he can do for himself. But the thing that the thing that is holding him back in Mississippi is his fear, fear of unequal treatment before the law and this is a greater fear than the fear of let's say physical violence by individual white."

Duff Thomas: Meredith was shot from ambush along the route of his march, but his injuries were not serious. Other Civil Rights leaders descended on Mississippi and organized a mass march to continue along the Meredith path. At the end of the march, a huge rally was held in Jackson to provide a final impact. It was at this event that the Chairman of the Student Non-Violent Coordinating Committee Stockley Carmichael came forward with a new explosive phrase.

Stockley Carmichael: "The three terms that black people in this country should learn at birth. One is 'White Supremacy,' one is 'New York Colonialism,' and one is 'Black Power.'"

Duff Thomas: No sooner had Carmichael said it when a half dozen negroes claimed they first going the phrase. Instead of unifying the Rights Movement, the cry for black power became the wedge which almost split it. Everyone employed his own definition for black power, but the slogan became associated with the more militant groups such as Snick and CORE. The more conservative rights leaders such as Dr. Martin Luther King and Roy Wilkins viewed black power as harmful to the Rights Movement. Wilkins explained --

Roy Wilkins: "Ideologically, if this stays up with blacks and down with whites in precisely the same fashion that South Africa reverses the slogan. It is in fact the reversed Mississippi, a reversed effort, a reversed two-cup clamp."

Duff Thomas: Regardless of what proponents of black power said it could do, Civil Rights legislation did not fair well in 1966. The Civil Rights Movement suffered its first major setback since 1957. Congress turned back the 1966 Civil Rights Bill, however the 1965 Voting Rights Act was upheld by the Supreme Court which ruled that the Federal Government could send examiners into State jurisdictions to register voters.

White backlash seemed to be the reason for the election of some candidates, perhaps it was because in November many people remembered the cry of black power and what they associated with it.

Duff Thomas: This was Cleveland, Ohio, but similar sounds were heard in Dayton, Atlanta, San Francisco, Oakland, Omaha, Muskegon, New York, Waukegan, Benton Harbor and St. Louis. It was senseless, it did no good and in nearly every case, local officials blamed it on outsiders. For example, Waukegan Mayor Robert Sabonjian said...

Robert Sabonjian: "I will not tolerate outside organizations or individuals to come into our community, to usurp our home rule."

Duff Thomas: One new story in 1966 touched several basis at once. Negro Julian Bond, former officer in Snick was elected to the Georgia Legislature in 1965. The legislature denied him his seat apparently because of some remarks he made about Vietnam.

Julian Bond: "I am fighting a battle over my right to say what I choose and the right of the people who live in my District in my constituency to make a free choice of who they want to represent them. That’s the issue, it’s not Vietnam."

Duff Thomas: Another election was held and he won again. Once more, he was denied a seat, he took it to the Supreme Court and the Court ruled that his freedom of speech had been abridged. Bond won for a third time and apparently Georgia House leaders will not oppose his right to the job in 1967.