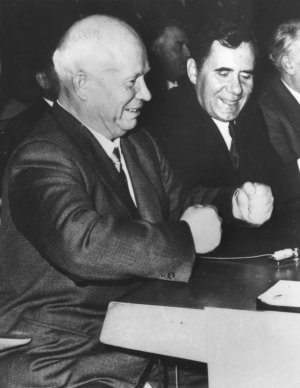 Andrei Gromyko (R), seen in this 1960 photo seated alongside Soviet leader Nikita Khrushchev as the latter pounded the table at the United Nations in New York. (UPI Photo/Files)

Pie Chamberlain: The great showman of the East, Nikita Khrushchev is replaced by man of less color and vitality, the generation of clerks and technocrats. Khrushchev succeeded Georgy Malenkov as head of the Soviet Communist Party, on March 14 1953, just nine days after Stalin’s death. In 11 years, the gregarious commissar left his mark on the world. He turned 4the cowering Russian Communists against Stalin, staged a gigantic firework of Sputniks and Luniks, set off multi megaton Nuclear tests and agreed to a partial test ban. He pounded a shoe on his desk in the UN, and split the Communist block being Moscow and Peking. He attempted the most daring penetration into this hemisphere, then back down in a global showdown before President Kennedy in the Cuban Missile Crisis.

In May of 1964, Khrushchev announced that Communism is actually a union of like minded people, and in October he promised greater allocations for the consumer industries. Thus he antagonized both the power hungry inner circle of the party, and the heavy industry oriented army. And so came the 15th October, Dick Grovel reports from Moscow.

Dick Grovel: "Khrushchev was down at Black Sea vacation resort. As Kremlin Comrade secretly took a vote and called Khrushchev back to Moscow and they fired him. I remember his pictures coming down quicker than the autumn leaves. I remember how Russians suddenly turned cold and silent at the mention of his name, or it would have been the Moscow year. We had Khrushchev roaring at the Chinese communist early in 1964. He called Mao Tsetung a dogmatist, an Anti-Marxist, and raised against Peking’s bid for world communist mastery and claims of Soviet Asian land. The Chinese responded calling Khrushchev a clown, a buffoon, a friend of the Capitalists. Peking and Moscow were headed for the final split, but the world stopped for us in Moscow, October the 14th. I remember best October 12th."

Dick Grovel: "The Russians had sent into orbit the world’s first space passenger ship. Three men up there looping around the earth, and Khrushchev promised the Cosmonauts, and Moscow welcomed greater than the force of gravity. The Cosmonauts got that welcome a week later, but Khrushchev wasn’t there.

"His closest friend have been stripped of power and the other old comrades, Mikoyan, new party leader Leonid Brezhnev and Premier Alexey Kosygin are put in together under regime. It's a new world in the Moscow now, 1964 did that. This is Dick Grovel in Moscow."