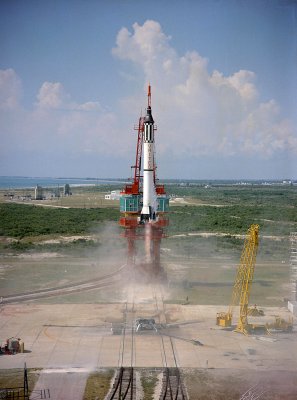 Astronaut Alan Shepard is hurled into space atop a Mercury-Redstone rocket on May 5, 1961. Freedom 7 was the first American manned suborbital space flight, making Shepard the first American in space. He later commanded the Apollo 14 mission, and was the fifth person to walk on the moon. (UPI Photo/NASA/FILE)

Announcer: The youthful President's initial impact on the nation was considerable. But just as he was getting established in the White House, a voice from across the seas electrified the world with this announcement.

Unknown Speaker: "Today, the first cosmic spaceship, named Vostok, with a man onboard was soon to be...from the Soviet Union. He is Airman Major Yuri Gagarin, an Air Force pilot, a citizen of the Union of the Soviet Socialist Republics."

Announcer: A man in space, fulfillment of one of man's oldest dreams: to escape the bonds of gravity.

Official Washington sent Moscow congratulations, but the pall of gloom that hung over the U.S. was unmistakable: the Russians had beaten America into space. But in early May, after much delay and agonizing postponements...

Announcer: America had done it: Navy Lieutenant-Commander Alan B. Shepard was in space. The years of preparation and snaillike progress were all forgotten. From the fringes of space came his voice.

Announcer: After the dramatic recovery, Commander Shepard appeared at a news conference. He explained in detail how he felt during the trip and then observed.

Lieutenant-Commander Alan B. Shepard: "… didn't really feel the flight was a success until the recovery had been successfully completed. It's not the fall that hurts; it's the sudden stop."

Announcer: In the summer of the year, the United States tried again …

Unknown Speaker 2: "There she goes! You can hear the roar as it slowly lifts from its pad, a streaming flame behind it as it goes straight, straight up into the air. Listen to that roar.

"There goes Astronaut Virgil 'Gus' Grissom on his ride into space; America's second spaceman is on his way."

Announcer: "Gus" Grissom, too, faced the throng of reporters and cameramen after he returned. Asked how he felt during the trip, Grissom revealed that our superhuman astronauts have normal human emotions.

Virgil "Gus" Grissom: "Well, I was scared a good portion of the time; I guess that's a pretty good indication."

Unknown Speaker: "You were what?"

Announcer: There were even more U.S. space triumphs during the year. The Saturn, believed to be the most powerful rocket ever launched, was successfully flight-tested.

Unknown Speaker: "This rocket as she takes off will have the power equivalent to 300,000-- 300,000 conventional automobiles, and later models will be even more powerful.

"Ignition, blastoff! Orange flames on all sides! Fire under the tail, and up the Saturn goes! She's rising very slowly -- I might say agonizingly slowly -- but going up and going straight up. A glorious needle of silver and orange, now it's white; white flame beneath the tail of the Saturn. Up she goes and up and she's going straight, and every second that the Saturn goes is a triumph. Every second this giant continues is considered a triumph by rocket masters."

Announcer: On August 29th, a young chimp named Enos was blasted aloft from Cape Canaveral, orbited twice round the world and brought safely back to Earth.

At a news conference later that afternoon came the announcement.

Unknown Speaker: "Two pilot teams have been selected for Project Mercury's initial manned orbital spaceflight. John H. Glenn, Jr. has been selected for the first flight, with Scott Carpenter acting as backup. Alan B. Shepard will act as Pilot Technical Advisor for this team, and Gordon Cooper will head up the Air Emergency Escape and Launch Area Recover Team."

Announcer: There were rumors for some weeks that the United States might try to orbit Glenn before the first of the year. But the 40-year-old astronaut will have to wait. NASA decided to wait until January before attempting the feat. The U.S. and her allies had hoped that history could record both major world powers as having orbited a man in the same calendar year.

Previous Story
Events of 1961
Next Story
Bay of Pigs Invasion