WASHINGTON, May 25 (UPI) -- The Army kept a soldier whistle-blower in a locked psychiatric ward at its top medical center for nearly two weeks despite concern from some medical staff that he be released, according to medical records.

The Army then charged him nearly $6,000 for the stay at Walter Reed Army Medical Center in Washington, billing records show.

"They are definitely retaliating against me," said Army Reserve Lt. Jullian Goodrum, a 16-year veteran of the Gulf War and Operation Iraqi Freedom.

Doctors say Goodrum suffers from post-traumatic stress disorder, or combat stress, from Iraq. Last summer Goodrum asked for an investigation into the death in Iraq of a 22-year-old soldier in his 212th Transportation Company. He was also quoted in a United Press International article about poor medical care at Fort Knox, Ky., that helped spark investigations in Congress.

Last fall Goodrum sought mental health care at Fort Knox but was turned away -- just days after complaining in the press about poor medical treatment at Fort Knox. "I said I was having problems. I told them I felt like I was having a breakdown right there," Goodrum said. "They did not care. They said leave."

A form from Fort Knox from the day Goodrum says he sought help states that Fort Knox officials in charge of medical care "do not want him" in the medical-hold unit at the base.

Goodrum then went to see a private doctor who hospitalized him. That doctor alerted Fort Knox that Goodrum had been hospitalized, according to Goodrum's medical records and documents from that doctor. But Fort Knox cut off his pay, terminated his Army medical insurance and threatened to charge him as absent without leave.

Goodrum showed up at Walter Reed hospital in Washington Feb. 9, where doctors admitted him to Ward 54, the locked psychiatric unit.

Walter Reed medical records reviewed by UPI describe Goodrum as "cooperative and polite" when he arrived, but also "anxious and depressed" and "largely preoccupied with concerns about legal charges and financial stressors."

Records show Goodrum progressed well over the next few days. "Patient in bright spirits, good mood, thought processes logical," his medical records say on Feb. 14. "Denies (suicidal or homicidal thoughts) and has been fulfilling all responsibilities." He was encouraged to take a weekend pass out of the hospital. Doctors planned to move him to outpatient therapy -- out of the locked ward -- on Feb. 19.

But records show Fort Knox officials contacted Walter Reed on Feb. 18 and said to keep him in the locked ward. "Contacted by DCCS at Fort Knox ... who provided additional information and expressed concerns regarding potential discharge of LT Goodrum," the records show. "Currently, due to legal/admin concerns the patient should remain on ward 54," the the locked ward. "Patient states that he is doing 'a little bit better' ... Pt is scheduled for intake (for outpatient therapy) tomorrow, however due to recent admin developments concerning command at Fort Knox this may need to be postponed."

His records show that Goodrum was held in the locked psychiatric ward for the next 13 days. His health appears to have deteriorated some because of that confinement. "They hurt me, in terms of my recovery. I was doing fine, then 'bam,'" Goodrum told UPI.

On Feb. 21 his record states: "Per chief of psychiatry patient will need to be (in the locked ward) because he has charges pending ... Pt voiced concerns regarding his reduction in status, pt stated that he will continue to be cooperative with staff and follow the current treatment plan but does not understand why he was reduced in status."

"Everything we do for a patient is based on their medical or clinical needs," Chidel said.

"As discussed previously, this inpatient hospitalization has been extended due to administrative concerns," the records say the next day. "This treatment could have taken place in an outpatient setting."

Walter Reed released Goodrum from the locked ward on March 2, one day after UPI published a story on allegations that Fort Knox refused to treat him.

On March 2, an addition to Goodrum's medical records states that Goodrum was "a voluntary patient for the duration of his admission." Goodrum told UPI, "That's not true."

Fort Knox officials have not charged Goodrum with any offense, and he says the Army still owes him thousands in back pay -- he did not get a paycheck from early November through April. "I've got a mortgage to pay," Goodrum said.

Fort Knox has declined to comment on Goodrum's care, also citing privacy concerns. Fort Knox spokeswoman Connie Shaffery said soldiers who do not report for duty at Fort Knox may be AWOL. "If a soldier is not at his or her duty station and is not in an authorized leave or pass status, he is absent without leave," Shaffery said. "When a soldier is listed as AWOL, it stops all pay and benefits."

UPI published a series of stories last fall about poor medical care for soldiers on "medical hold" at U.S. bases, including many who served in Iraq like Goodrum. In response, the Pentagon announced a series of new polices and has pledged $77 million towards fixing the problem.

On Oct. 29, 2003, Under Secretary of Defense David S. C. Chu drafted new health care rules that said soldiers should be referred to private doctors if needed. When Goodrum could not get care at Fort Knox, he went to a private doctor instead. His medical records show that Fort Knox officials considered that "unacceptable."

"They are totally violating their own policy," Goodrum said. He said he has complained about his treatment at Fort Knox to his congressman, U.S. Rep. John J. Duncan, R-Tenn. A spokesman for Duncan said he is aware of Goodrum's complaint but couldn't comment on it.

Goodrum was named the 176th Maintenance Battalion's "Soldier of the Year" in 2001. He has received a host of awards, including the combat action ribbon, and positive reviews from superior officers.

"Lt. Goodrum is a truly outstanding junior officer," reads one performance evaluation from 2002. "In addition to his technical competence, he demonstrates great leadership potential. ... Promote to captain and select for advance military schooling." 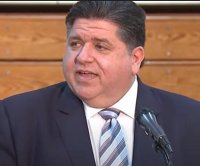 Health News // 7 hours ago
Neonicotinoid insecticides harm bees even in small amounts
Aug. 2 (UPI) -- A type of insecticide, called neonicotinoids, is harmful to bees when applied to commercial crops, even at levels on par with instructions on their labels, according to a study published Monday.
Advertisement