BIRMINGHAM, England, March 5 (UPI) -- British students are learning a language based on Welsh sounds invented by JRR Tolkien, author of "The Lord of the Rings."

Students at Turves Green Boys' Technology College in Birmingham, England, are being offered lessons in a conversational form of Elvish called Sindarin. The teacher behind the plan, Zainab Thorp, said she was offering the classes to boost some pupils' self-esteem, The Sun reported.

"The recent success of the 'Lord of the Rings' films has increased the interest in learning Elvish," she said. "The children really enjoy it. It breaks the idea that education should simply be aimed at getting a job." 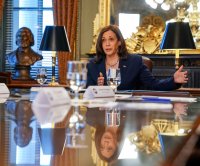 Odd News // 7 minutes ago
British Columbia boy doubles own world record for Jenga stacking
May 17 (UPI) -- A British Columbia boy with a gift for balance broke his own Guinness World Record by stacking 1,400 Jenga blocks on a single block -- more than doubling his previous record.

U.S. News // 1 hour ago
Freight train derails in northern Iowa hauling ammonium nitrate
May 17 (UPI) -- A fire from a derailed freight train in northern Iowa continued to burn on Monday and some people are still away from their homes after officials ordered an evacuation.