"There are 320 dead and 460 injured so far," said Ali Hosseini, head of the Red Crescent in Khorasan province, the scene of the blast.

"But many are still under rubble and we are expecting the death toll to rise."

As firefighters tried to put out the fires, several train cars exploded around 9:20 a.m. local time near the town of Neyshabur in northeastern Iran.

The tragedy comes as Iran is still recovering from the deaths of some 40,000 in Bam from an earthquake late last year.

World News // 3 hours ago
Indonesia's Mount Merapi produces thunderous eruption
Mount Merapi, the most active volcano in Indonesia, erupted Wednesday, sending a river of lava down its slopes and causing searing gas clouds to billow 10,000 feet into the sky. 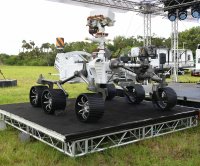 Science News // 4 hours ago
Lunar cycle can influence circadian rhythms of humans, study says
Jan. 27 (UPI) -- New research suggests human sleep patterns are synced to the lunar cycle, based on a study of indigenous groups in Argentina and college students in Seattle.

Odd News // 4 hours ago
Man discovers $2M lottery jackpot hours after crashing car
Jan. 27 (UPI) -- A North Carolina man who started off his day with a car accident said his luck turned around when he won a $2 million lottery jackpot later in the same day.

Odd News // 5 hours ago
New York man's class ring found after 11 years
Jan. 27 (UPI) -- A New York man who lost his high school class ring during a walk in the park was reunited with the ring 11 years later, thanks to the daughter of the man who found it.