WASHINGTON, Sept. 12 -- One great opportunity and a more subtle and even seductive danger have begun to emerge from the rubble of those twin symbols of America's financial and military might at the World Trade Center and the Pentagon.

The opportunity is to put together an unprecedented global coalition of the civilized world against terrorism, to pool intelligence and security assets and their capabilities for retaliation in concerted counter-attack against the wickedness.

This is already happening. America's friends rallied quickly, and not just with the rhetoric that had German Chancellor Gerhard Schroeder speaking of "a declaration of war against the entire civilized world."

As always, Britain's Government Communications Headquarters at Cheltenham was sharing their raw surveillance data with America's National Security Agency. The elite SAS in Hereford sent a discreet private message to the Pentagon offering "anything you want -- just ask and it's done." As the flag at Downing Street flew at half-mast on Wednesday, the profound emotional intimacy and political trust between Britain and America was once more instinctively on display.

But the French and Germans, the Japanese and Jordanians, the Russians and the exceedingly well-informed Israelis, are also offering all the intelligence data they have.

Not an electron is now stirring over the communications networks of the entire Middle East without its being monitored and forwarded to NSA headquarters at Fort Meade.

The Bush administration is sensible of the opportunity on offer, to carve a deep and defining line in international politics and morality between the terrorists and their targets. And after the blows against America, the targets now include almost all of us in the democratic world. Secretary of State Colin Powell publicly recognized the scale of the prospect Wednesday morning.

That is absolutely right. But it could also steer the civilized world into dangerously misleading policies.

There are two cardinal principles to bear in mind. The first is that not all terrorists are created equal, whatever the snide remarks about former Israeli premier Menachem Begin's work in the terrorist Stern gang that fought the British for Israel's nationhood, or about Yasser Arafat's use of hijackings and terror to establish a Palestinian legitimacy.

There are rational terrorists who take the dreadful moral choice of bombing their way to the peace table. And there are the mad dogs, with whom there can be no rational discourse and who boast no comprehensible, negotiable goal, but who simply want to blow up the table.

Osama bin Laden is a mad dog. He was a mad dog before Tuesday's attacks on New York and Washington and he will be a mad dog next week even if his latest protestations of innocence turn out to be true. He has been a mad dog since his presumptuous "declaration of war" against the United States in August 1996.

We must not confuse the rational with the mad dogs, not make that mistake with which Israel has flirted to its cost, of confusing rational and comprehensible political leaders like Arafat with the crazies with whom there can be no quarter. We must not make the mistake of seeing all Palestinian militants, all Arab nationalists and all Islamic fundamentalists as the mortal foe.

We should be wary, therefore, of attempts to recruit America's mood of justified outrage and vengeance into a promiscuous global assault against anything that can be dubbed "terrorism." We should think hard about the assertion of President Vladimir Putin, who has his own domestic political reasons for saying this, that the Islamic militants of Chechnya are the blood brothers of the Osama bin Ladens and whoever might have been behind the outrages against America.

The second seductive danger follows from the first. If the civilized world is indeed the target, then it cannot afford to shed its civilization in the battle to save it.

The British learned in the 30-year struggle against Northern Irish terrorism that it is desperately important to uphold the rule of law. Democracies must grit their teeth and put on trial those soldiers and policemen who shoot to kill without justification, must make full public inquiries into atrocious errors by the security forces, must be ready to hear legal appeals against acts of injustice.

It is not easy being the good guys. It will not be easy summoning the patience and skepticism to insist that a 60 or 70 percent proof of guilt against Osama bin Laden is not enough to trigger retaliation. It will not be easy reminding ourselves that the most precious thing we have to defend is our freedoms and our human rights and our democratic institutions.

But if we destroy those, then the mad dogs will have won.NEWLN:

World News // 3 hours ago
Japan decides to release Fukushima wastewater into ocean
April 12 (UPI) -- Japan said Tuesday it has decided to release tons of treated wastewater from the Fukushima nuclear plant into the ocean despite strong push back from conservation groups and concern from neighboring nations. 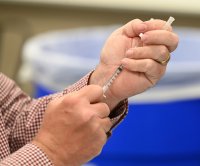