Higuchi, now an opposition congresswoman, made the accusation during an interview with RPP radio.

Higuchi said she was beaten and received electric shocks at the headquarters of Montesinos' now-closed National Intelligence Service, at the so-called "Pentagonito" Armed Forces headquarters and at the Government Palace.

She said that in June, she was taken to a hospital in central Lima in a coma and was tortured after regaining consciousness.

Tthe director of the Archbishop Loayza Hospital, Jose Maurici, confirmed that the first lady had been in his hospital on June 4, but said her admission into the intensive care unit was for medical problems and not as a result of torture. He also said Higuchi might have been disoriented.

A leaked videotape that showed Montesinos apparently bribing a congressman forced Fujimori to announce in September that he would step down next July after new elections. Fujimori also ordered the deactivation of the National Intelligence Service. Montesinos has been in hiding since his return to Peru three weeks ago after a failed asylum bid in Panama.

The former first lady said she was first tortured in 1992 for having denounced her sister-in-law for illegally selling donated clothing from Japan. Higuchi continued to be a thorn in the president's side. She publicly accused her husband of being authoritarian and said corruption was rampant in the government. On one occasion, she hailed reporters from a window in the Government Palace and claimed she was being held prisoner.

At the end of 1993, Fujimori and Huguchi formally separated. In 1994, Higuchi announced that she planned to form a political party and challenge her husband for the presidency. Later that year, the Congress passed what became known as the "Susana Law" that barred the president's family members from running for office.

Fujimori officially fired her as first lady in 1994, and the two were eventually divorced. The couple's daughter, Keiko Sofia, has since taken on the role of first lady.

Earlier this year, Higuchi won a seat in Congress on a small opposition ticket, the Independent Moralizing Front, or FIM. During her campaign, she remained a vocal Fujimori critic.

The now-famous video showing Montesinos bribing the congressman to switch his allegiance to the pro-Fujimori Congressional alliance was aired by members of the former first lady's opposition party. 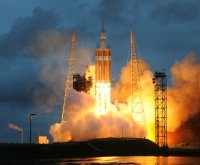 Top News // 9 hours ago
UPI Almanac for Sunday, Dec. 5, 2021
On Dec. 5, 2014, NASA successfully launched its Orion spacecraft, its hope for the future of manned space travel and an eventual trip to Mars.

U.S. News // 15 hours ago
Man arrested for harassing judge presiding over Kim Potter trial
Dec. 4 (UPI) -- A Minneapolis man was arrested in Wisconsin on charges that he harassed the judge presiding over the trial of former police officer KimPotter in relation to the death of Daunte Wright.

World News // 17 hours ago
Britain announces new COVID-19 test rules for international travelers
Dec. 4 (UPI) -- Health officials in Britain have announced that all international visitors will be required to take a COVID-19 test before traveling in a bid to curb the spread of the omicron variant.