FORT WORTH, Texas, Sept. 16 -- Members of the Wedgwood Baptist Church have turned to prayer in an effort to recover from a deadly shooting spree at their church that left eight people dead, including the gunman. Pastor Allen Meredith's voice broke today as he expressed sorrow for the loss of life. 'These people were Sunday school teachers and the favorite souls of the church. Our hearts are broken, but not crushed,' he said, as prayer services were being organized throughout the southwest Fort Worth area. The gunman killed three adults, including the leader of the children's choir, and four teenagers ranging in age from 14 to 17. Seven people were wounded. One of them, a boy who turned 16 on the day of the shooting, is paralyzed from a gunshot wound in his back. Police and FBI agents today searched the home of gunman Larry Gene Ashbrook, 47, to collect evidence after he opened fire on more than 150 teenagers and adults at a Christian youth rally Wednesday night. A bomb squad cleared Ashbrook's Forest Hills home, 10 miles from the church, before FBI agents entered because a pipe bomb had been used in the attack at the church and they feared there might be more in the house. After the search, FBI Special Agent in Charge Bob Garrity said they found evidence of 'a very emotionally disturbed person' who was bitter about not being able hold a job. He lived alone in his parents former home.

Garrity said agents also found hacksaw blades, fresh black powder and other indications that a pipe bomb had been built recently. Ashbrook allegedly tossed a 'low velocity' pipe bomb inside the church during his rampage. Garrity said the house was 'trashed,' with furniture turned upside down, holes punched in the walls, photos hacked up, and fresh concrete poured down the toilet, indicating he did not intend to return home. Acting Police Chief Ralph Mendoza also said today the .380 caliber and 9mm semi-automatic pistols were apparently purchased legally in 1992 in the Fort Worth area, one at a now-closed gun shop and another at a nearby flea market. Mendoza said Ashbrook walked into the church about 7 p.m. CDT and shot a maintenance worker in the lobby, then shot a woman who was sitting on a sofa. He then entered a hallway where a band was playing. He shot the third victim there, then entered the church and began firing randomly at people. Mendoza said Ashbrook shouted in anger at the churchgoers while shooting. He said several witnesses remember him saying, 'This is all (expletive). I can't believe you believe this junk and singing this.' Mendoza said many of those inside the church thought it was a skit and at one point he shouted at them 'this is real.' The chief speculated that was why there were so many victims. 'They were not running,' he said. Mendoza said it's unclear how many shots were fired, but 30 shell casings were found in the church along with three empty 9mm clips. Witnesses said Ashbrook then sat down on a pew at the back of the sanctuary, pointed one of the pistols at his head, and fired. Mendoza said they have found no record of Ashbrook being treated for any mental illness and no indication of any link to a terrorist group. He said his only arrest was in 1971 for illegal possession of narcotics and marijuana. The dead were identified as Kristi Beckel, 14; Joseph D. Ennis, 14; Cassandra Griffin, 14; Justin M. Ray, 17; Sydney R. Browning, 36; Shawn C. Brown, 23, and Susan Kimberly Jones, 23. --- 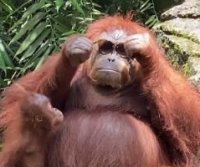